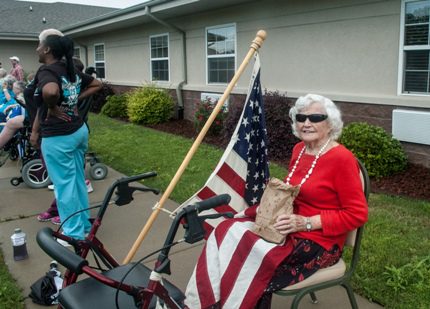 Tidwell is a resident at Salem Place and a Navy veteran of World War II. At the game, she was presented with an American flag, delivered on horseback by Toby Hart.

This is the second year for the game, which featured Black and Blue teams.

Ed Welsh, a volunteer at Salem Place, organized the event and involved several from throughout the community. Conway Police Chief AJ Gary threw the first pitch. KTHV’s Craig O’Neill was also on hand.

Welsh expressed his appreciation to individuals who made the event possible, including his family, Salem administrator Vickey Kirkemier and activity/social directors Bonnie Malone and Debbie Howell.


“I titled this ‘What Victory’ because it was cast before the score was even posted,” Welsh said. “The victory was the look I saw in their eyes and in the smiles of residents who had a day that they will talk about for a long time. This was their day at the ballpark.”