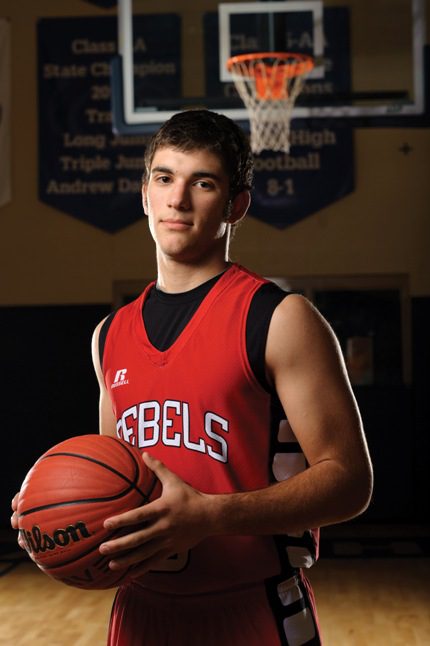 
With less than a month remaining in the regular season, Sacred Heart senior guard Joe Beck fully understands the challenges that lie ahead for the Rebels. Off to a 9-15 start (as of press time), the Rebels are looking to make an impact during the final weeks of the season — not just in the 1A-5 North conference, but the entire state of Arkansas as well.

“We had a good year last year, but we fell short of our expectations in conference and district,” Beck said. “We are looking to bounce back this year. I’d like us to get farther than we did last year. If we could make a run at state, it would fulfill everything we can do as a team.”


Beck was selected to this year’s 501 Basketball Team — 24 players representing the best the 501 has to offer both on and off the court. Beck was nominated by Sacred Heart’s head coach, Aaron Duvall.


“Joe has been a big part of the team since he was our sixth man as a sophomore,” Duvall said. “He is an excellent leader to go along with his basketball skills. He can shoot, handle the ball and is one of the strongest players on the team, which allows him to rebound well. He can do a little bit of everything to help his team win.”


Achieving the team’s goals this season will not come without hard work, but Duvall says Beck and the Rebels do not back down from a challenge easily.


“What makes Joe a great teammate is his desire to win,” Duvall said. “Joe is a winner. His work ethic inspires his teammates to work harder themselves. He is also very supportive and works well with the younger players. Joe is a guy who makes his teammates better just by being on the floor.”


In order to capture the conference championship this season, the Rebels would have to go through currently undefeated conference rival Wonderview — a matchup that would have special significance for Beck.


“One of my cousins plays at Wonderview,” Beck said. “The competition is great between us. It’s a big rivalry all the time, but it’s never awkward.”


When he’s not playing basketball, the multitalented senior enjoys success for Sacret Heart’s baseball and golf programs as well.


“Joe is not only captain of the basketball team, but is a two-year captain and an all-state selection in baseball,” Duvall said. “He is a four-year starter on the baseball team. He also is a standout golfer and helped lead the Rebels to a district championship in golf this season.”


In the classroom, Beck serves as student council president and is active in Beta Club. He performs community service activities with Key Club.


“Joe was elected as student council president by his peers so he is obviously held in high esteem by his classmates,” Duvall said. “This is due to his work ethic in the classroom and because he is a natural leader.”