Volunteers do more than they have to, because they want to, for a cause they believe in. Such has been the case for the hundreds of volunteers who have helped to make the annual Dazzle Daze holiday shopping market a success for the past seven years. Sometimes the three-day event is so jam-packed that the shoppers – and even the workers and merchants – forget its financial contribution and the impact on those served through the funds raised.

Since its inception in 2001, Dazzle Daze has offered help and hope to patients and staff of the Conway Regional Health System.

Each year as the number of shoppers has increased, so has the number of programs that have benefitted from this very successful fundraiser. Here are just a few examples:

316 women, after losing their hair from cancer treatments, have been fitted with a wig through the Look Good…Feel Better program (from November 2002 – August 2009). 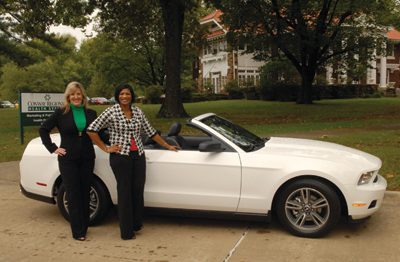 1,161 babies have been born at the Conway Regional Women’s Center in the first eight months of this year. Many of these babies are warmed in the two neonatal infant warmers Dazzle Daze purchased. These children are spending some of their first hours after birth in equipment acquired from those efforts.

As of August 2009, 53 patients have benefitted from the intra-aortic cardiac balloon pump purchased with proceeds from the 2005 event.

Sherry and Fletcher Smith, third generation owners of Conway’s oldest jewelry store, view their contribution to the hospital not as a choice but as a responsibility.

“Since 2003, we have participated in Dazzle Daze. Each year, I walk around the store’s display cases to find just the right gift that will appeal to the shoppers at Girls’ Nite Out,” said Sherry. “We have had a family member or someone we know who has been helped each year through at least one of the programs chosen for funding. That’s why we give. It’s not about us, but about the bigger picture of how we can make this community better.”

Girls’ Nite Out is the opening event for Dazzle Daze, and Fletcher Smith Jewelers has put the fun in fundraising by providing a piece of jewelry in the $1,000 to $2,000 range. The first 50 shoppers to spend $100 with merchants are entered into a drawing for the piece of jewelry. Last year, Smith notes, the winner was someone who had never before had a piece of nice jewelry.

Shelia Whitmore and Kathy Wyrick, co-chairs of the 2009 event, acknowledge that if there is a secret to success, it’s the commitment of Dazzle Daze volunteers. “From teenagers to octogenarians, volunteers are the heartbeat in planning and

implementing such a large event. It takes a lot of people to pull it together, but it’s energizing to know our work will help so many more through Conway Regional,” Shelia said.

This year’s holiday shopping extravaganza is Thursday, Nov. 19, through Saturday, Nov. 21, at the Don Owen Sports Center in Conway, and the market will be filled with a wide variety of merchandise, from baubles to bath to holiday and more.

Just as the event starts with a great prize, the exciting conclusion will be announcing the lucky winner of a new Ford Mustang.

For the third consecutive year, Smith Ford in Conway will provide a fully decked out Ford Mustang convertible, and the $100 raffle tickets are limited to 500, making the odds quite reasonable.

Maybe you have attended Dazzle Daze in past years. Perhaps Conway Regional has served you or a loved one. You might even be impressed that the Conway Regional Women’s Council, the umbrella organization for Dazzle Daze, was named the 2007 Outstanding Philanthropic Organization of the Year from the Association of Fundraising Professionals Arkansas Chapter, or that Arkansas Business and Professional Women honored the women’s council as the 2007 Organization of the Year.

And if you haven’t considered joining the women’s council – open to women of all ages who would like the opportunity to learn more about health issues while contributing their talents toward the improvement of health in their communities – this is the perfect time to say yes.

The wise Dr. Seuss summed up the reason for volunteerism quite well – “Unless someone like you cares a whole awful lot, nothing is going to get better. It’s not.”