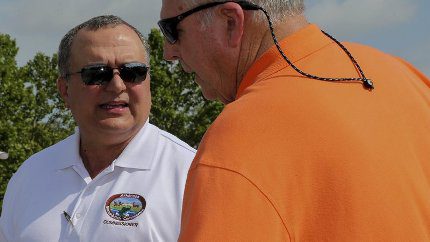 Steve Cook of Malvern was recently elected chairman of the Arkansas Game and Fish Commission at its regularly scheduled June meeting in Jonesboro. Cook has served six years on the Commission, and this marks his seventh and final year to serve for the sportsmen and women of Arkansas and its natural resources.


“I feel truly blessed to be given the honor of serving alongside these fine conservationists and to be in a position to serve at the highest level for the men and women of our state,” Cook said. “Not just for those who enjoy the resource today, but all those who will come after I’m gone. To know that my decisions and actions can make that sort of a lasting impact derives a great sense of responsibility and awe at the same time. And I can promise you that I will do my utmost to fulfill the duties of this great honor.”


Cook replaces Fred Brown of Corning, whose term will end at the end of June. Cook says Brown was more than a fellow commissioner, he was a mentor through some very turbulent times at the Commission.


“He’s more than a friend,” Cook said. “He’s a brother who I have had the honor of standing behind and beside through our time at the Commission. He’s shown us all a true example of leadership and has left some pretty large boots to fill.”


Gov. Mike Beebe appointed Cook to the Commission in 2011 to replace Craig Campbell of Little Rock. He was born and raised in Hot Spring County, and grew up learning to hunt and fish along the Ouachita River. He has been involved with Ducks Unlimited for more than 30 years, serving previously as the Arkansas state chairman. He also is a member of the National Wild Turkey Federation, Pheasants Forever and other conservation causes. In addition, Cook has served on the executive committee of the Arkansas State Police Foundation and as a longtime commander of the Hot Spring County Sheriff’s Office’s Reserve Deputies.