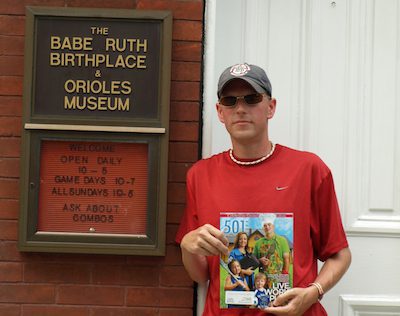 
Alex finished up his family medicine residency at the end of June. Before joining his father’s medical practice this fall, Alex set out on a unique, three-month vacation with one goal in mind – to visit every ballpark in Major League Baseball.

A baseball fan since he was a young boy, Alex remembers going to his first game when he was 6. “It was with my dad and grandfather in St. Louis,” he said, explaining that he was “raised” on baseball. “If you’re born into this family, you’re pretty much stuck with baseball and St. Louis.”


On July 2, Alex began his baseball trip, headed to the first ball stop – Minute Maid Park in Houston. The trip will end at his “baseball home” on Sunday, Sept. 25, at Busch Stadium in St. Louis.


During the trip, Alex has kept a blog complete with photos and information (and his own rankings) on each ballpark, including the atmosphere, the crowd, the scorecard, the broadcasters, the hot dogs and the entertainment. (Visit 1stlfan.blogspot.com)


Alex came up with the idea for the trip a couple years ago. “I don’t know what gave me the actual idea, though. I started moonlighting after my first year of residency and finally had some money I could stash away for something like this, so that’s what I did.”


The real planning began in February. “I did some skeleton planning over a couple years, just playing with the budget and that kind of stuff,” he said. “I started with the dates of the All-Star Game in Phoenix and the Little League World Series in Williamsport, Penn., and worked around that.”


During the trip, Alex has also checked out other points of interest including several national parks. The list included Yosemite; Yellowstone; the Field of Dreams in Dyersville, Iowa; and Cooperstown. “The trip will consist of more than just baseball. There are just too many places along the way to just pass them by.”


Nearing the end of his trip, Alex said he has enjoyed most “the Little League World Series…hands down.”


He also has enjoyed and been somewhat surprised by the many people he has met along the way. “I’ve probably known this for some time but just am realizing it more. You can learn a lot about someone after just a few minutes of conversation. There was Bill in Yosemite, an older gentleman who has been a paraplegic most of his life who wanted to know all about the Half Dome Hike. I ended up finding a tire guy in Napa through him.


“There was a guy in the stands at the Little League World Series. He was from San Angelo, Texas, and his team was two wins away from making it to the LLWS in 1960. They’d had actually just held a 50th anniversary celebration last year. And, to top that one off, he had to take a picture of his hot dog to send to his son . . . if you’ve read my blog, you’ve seen my hot dog coverage.


“I also met a retired couple at a bed and breakfast. We ended up spending three days together, and I now essentially have an open invitation to stay in Phoenix and watch baseball.”


When his trip is complete, Alex anticipates that he will have traveled 18,000-plus miles, most by car. “I’ve done 34 states plus D.C. plus Ontario. There will probably be four or five more states to go, depending on how I drive back home.”


Travel time has also given Alex an opportunity to consider his next great adventure. Interestingly, it involves baseball.


“The ballparks all have their unique features that make them different. What I want to do in the future is pick out a place or two to go back to for a series each year. Somewhere different each time and at a time when that particular team is doing well. Big, rowdy crowds make it a lot more fun and those seem to have been the places I enjoyed the most.”


Hot Dogs Eaten
Too Many