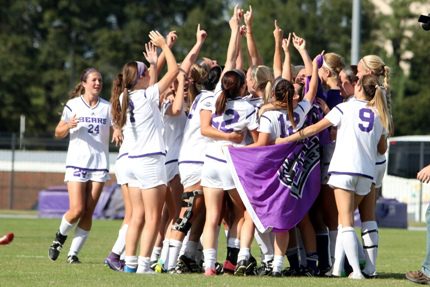 The Central Arkansas women’s soccer team picked up its biggest win of the season on Sunday afternoon, clinching the Southland Conference regular season title with a 3-0 win over the Nicholls Colonels at the Bill Stephens Complex. The title is the first for the Bears in the program’s 19-year history.


“It’s been a really long process,” said UCA head coach Jeremy Bishop after the match. “This is our fifth season, and we started making strides during the first couple of years, took a step back the third year, but then the momentum of getting into the tournament last year and having a really competitive season, really gave the girls that this could happen with more hard work and a little more commitment. And that’s what they’ve done this year.


“This group has been amazing, they work extremely hard, they have the commitment to do the right things to make sure they’re ready to play every time out, and it showed this season. Listening to the game plan, putting it into play, leadership of the upperclassmen, especially the seniors, has been great. All the things you need to have a successful season, a championship season, we’ve had this year.”


The Bears (14-3-1, 9-0-1 SLC) got the match’s first goal in the 21st minute when senior Allie Coleman launched a free kick from 40 yards out that bounced through the box and found the back of the net for her first goal of the season. UCA would strike again just five minutes later, as sophomore Camille Bassett swung the ball in to the box from the left wing to fellow sophomore Ashley Smith, who finished bottom-left to make it 2-0 Bears with her ninth goal of the season.


Central Arkansas would cap the game’s scoring in the 66th minute, when senior Shelby Wilson fired a corner kick into the box, where Coleman tapped it to Smith, who knocked it home from close range for her 10th goal.


The Central Arkansas defense was dominant on the day, limiting the Colonels (6-7-2, 3-5-2 SLC) to just four shots for its 10th shutout of the season. In keeping Nicholls from putting a shot on goal, the Bears accomplished the feat for the first time since Sept, 14, 2012, against Arkansas-Pine Bluff.


The win secured the Bears’ spot at the top of the Southland Conference table with one game left to play. UCA’s previous best finish in the Southland was a sixth-place finish in 2013. The Bears will be the top seed in the 2016 Southland Conference Women’s Soccer Championship Tournament, which takes place in Corpus Christi, Texas, from Nov. 2 through Nov 6. By securing one of the top two seeds in the tournament, the Bears have earned a first-round bye.


But first, the Bears will look to complete an undefeated Southland Conference schedule with a victory on Friday evening against Northwestern State. Kickoff is set for 7 p.m., with the Bears honoring seniors Wilson, Coleman, Chele Naudin and Kelsey Johnson, as well as junior Allie Moroney, who will be graduating early, before the match.


“They’re a special group,” said Bishop of his senior class. “They’ve come so far. As freshmen, just being immature and not really knowing what it takes to win at this level, to where they are now, just being great teammates, setting a good example, and expecting a lot of the underclassmen, they do all of it. And on the field they work harder than anyone else. And KJ would be right there doing it all too, if she was released. But her leadership really came through this summer, coming back after her surgery, getting out and passing fitness tests. I think it was huge for our group to see that it means this much to her and they just followed suit.”


“Obviously having everything locked up early is huge,” said Bishop of the match against Northwestern State. “To be able to do it early and take pressure off of Senior Night, and we can just go out and play and have fun, and I think we’ll play really well in that situation. It’s great to have that, to know that we’ve reached a lot of the goals we’ve set, but the tournament is part of that, we have to keep ourselves going, and if we have a letdown on Friday, that could carry over into the tournament. So we have to come out ready to play and focused, and ready to send the seniors off the right way in their final home game.”