14 Nov Clinton’s Davidson: ‘Play for each other’ 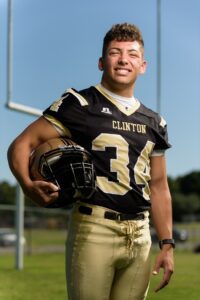 Sky Davidson and the Clinton Yellow Jackets have unfinished business. After falling in the 3A quarterfinals in 2017, the Yellow Jackets kept the success rolling this season with a second-straight perfect regular season. The stage is set, and the goal is a state championship.

“Last year, we had the heart to make the championship, but we fell short,” Davidson said. “This year is different. We have a lot more skilled players that moved up, and we have a bond between our team that makes us unique. I have faith that if we play for each other and follow our coaches’ motives, we will be headed to War Memorial.

“We want to win state, have fun and become a band of brothers.”

Davidson, a senior running back/linebacker for Clinton, was selected to this year’s 501 Football Team — 28 players representing all 11 counties of the 501. The team, sponsored by Conway Ortho and Sports Medicine Center, Conway Regional Health System and First Security Bank, boasts the best the 501 has to offer both on and off the field. Davidson was nominated by his head coach, Chris Dufrene.

“Sky is tough as nails, very physical and a great teammate,” Dufrene wrote in his nomination. “And teachers love him. He has a 4.0 GPA.”

Last week, Clinton opened the 3A state playoffs with an emphatic win over Charleston, 49-0.

“Shutting out Charleston was the highlight of the year,” Davidson said. “We stayed humble, we executed well against them and we were glad we had a great crowd to cheer us on. We can distribute the ball to many playmakers and follow our reliable offensive line to the promise land. Our defensive line has the ability to put pressure on quarterbacks.”

This week, Clinton plays host to Prescott, who also scored more than 40 points in the first round of the playoffs.

“The game plan is to keep grinding through our practices, listen and trust our coaches’ strategies and play for each other,” Davidson said.

Davidson is even more productive for Clinton High School off the field, serving as Student Council president and participating in Bible Club and Science Club. He also sings in the Clinton High choir.

In his free time, you can find Davidson in the air. Literally. He’s a trained and licensed pilot.

“I like to fly my Cessna 172 around Arkansas and look at its natural beauty,” Davidson said.

After high school, the ambitious Davidson plans to attend college, join the Navy and become a naval fighter pilot. After the military, he’s aiming to do something with politics or aviation.

Davidson and the Yellow Jackets (11-0) play host to Prescott in the second round of the 3A playoffs at 7 p.m. Friday.