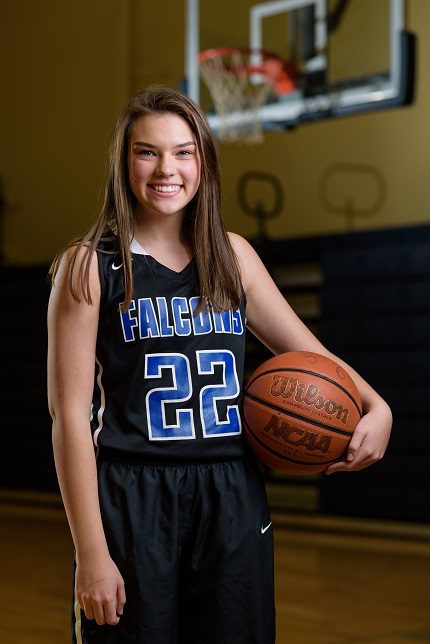 
Sarah Owen’s senior campaign is a story of growth. Through hard work and improvement, Owen has developed into a go-to leader for the Faulkner County Falcons in her second season with the team.


“Sarah worked hard over the summer, improving her shooting skills,” Falcons Coach Michael Corder said. “In joining the team last year, she was hesitant to shoot the ball, quick to pass. In early practices this year, there is a confidence in her that we haven’t seen on the offensive side of the ball. We expect somewhat of a breakout year for her on offense to match what she does on the defensive side of the ball.”


“Sarah worked hard to be a key contributor to our team,” Corder said. “Her defense is her best asset to the team. She has taken every challenge that she has been given and met it head on. We are expecting big things from Sarah this year on the court.”


Owen, a senior guard/forward for the Falcons, was selected to this year’s 501 Basketball Team — 37 players representing the best the 501 has to offer both on and off the court. The team is sponsored by Conway Ortho and Sports Medicine, Conway Regional Health System and First Security Bank. Owen was nominated by Corder.


“Sarah is a great teammate,” Corder said. “She is a team player in every sense of the word. She is quick to encourage a teammate when they are struggling and keeps a positive attitude throughout practices and games.


“Sarah embellishes the word role. She is very confident in what she brings to the team and focuses on what she can do for the team. She has a never-ending motor and plays until the buzzer goes off.”


Owen started playing basketball in middle school when she was attending a public school. In junior high, she took a break from basketball to pursue another passion — dance. After switching to homeschool, Owen picked basketball back up with the Faulkner County Falcons.


“I started playing again as a way to make new friends,” Owen said. “It’s been great playing for [Coach Corder]. He is so encouraging and has so much love for the sport that he pushes me to do things that I thought I could never do. He always says we are building a sandwich, and by the end of our practice we have added something to our sandwich.”


The Falcons placed third in their division last season at the national homeschool tournament in Springfield, Mo. New faces bring new challenges and opportunities for the Falcons.


“We have gotten a lot of new girls this season,” Owen said. “We are working to be able to improve the chemistry between us so we can play better as a team. I want to be an inspiration to girls who don’t have the confidence in themselves, and hopefully they will see how having confidence in myself made me become a better ball player.”


In addition to basketball, Owen is a competitive dancer at Irby Dance Studio in Conway. She attends Central Baptist Church and plans to attend an Arkansas college next year to pursue pre-veterinarian classes in preparation for veterinarian school.


“Sarah is a very quiet person with a kind heart,” Corder said. “She possesses a Christ-like attitude in the way she approaches life and is a good example for our younger players. When she is not playing basketball, you will either find her at a dance competition or hunting down South with her dogs. I’ve been told she is a regular ‘Annie Oakley’ with a rifle.”