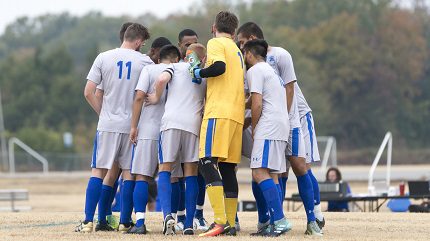 
Durham’s goal came in the 98th minute on a pass from Callum Morris and ended a back-and-forth affair that saw very few chances. Sam Collins stopped the only chances he faced on the evening as the Mustangs used suffocating defense to frustrate the Spartans offense.


CBC now advances to the AMC title game, where they will take on Columbia College. Kickoff has yet to be determined.


The last time CBC and Columbia met, the Mustangs had a 1-0 lead at halftime only to see the Cougars come away with a 2-1 victory at Centennial Soccer Park on October 24. A victory for CBC would propel them to their first ever National Association of Intercollegiate Athletic tournament in program history.


In previous action, Callum Morris’ header in the final minute of the second overtime period pushed the Central Baptist College men’s soccer team into the semifinals of the tournament.


Morris’ goal, combined with a first half strike from Nestor Moguel, gave CBC (8-10) a 2-1 victory over Lindenwood-Belleville (6-9-2), sending the Mustangs to their first ever appearance in the conference semifinals.


Sam Collins was brilliant in goal for the Mustangs and the two seniors were the key contributors on offense.