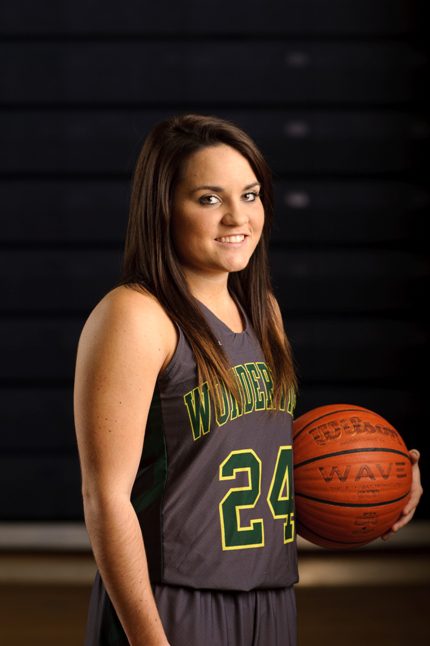 
Raegan Jones and the Wonderview Lady Daredevils are on a clear mission — get back to the 1A championship and avenge the last two years.


Jones, a senior guard for Wonderview, has had quite the postseason experience in her high school career, but the story has yet to finish the way she would like.


“Moving up as a ninth grader and starting on the senior high team is one of my favorite memories,” Jones said. “We made it to the quarter finals of state that year, which was such a neat experience.”


The past two seasons as a sophomore and junior, Jones and Wonderview made it all the way to the 1A final both times — and both times fell to cross-county and 1A 5 North rival Nemo Vista.


In their most recent matchup Tuesday, Wonderview fell at Nemo Vista, 56-39. Knowing the history between these two teams, the rivals will most likely face off again in the upcoming district and regional tournaments.


Jones was selected to this year’s 501 Basketball Team — 35 players representing the best the 501 has to offer both on and off the court. She was nominated by her head coach, Jeremy Simon.


“Raegan is a four-year starter and her best quality is simply the energy that she brings on the court each game,” Simon wrote in his nomination. “She runs down long rebounds and gets tons of loose balls. She is a great defensive player. Over the past few years she has been the one who guards our opponent’s best player. She is a good ball handler.


“Raegan has been a starter since her ninth grade year and has played in three regional finals, three state semi-finals and two state championship games. She is a very experienced player and she is using her knowledge to help her teammates. She is very vocal in practice and in the locker room. She is a great leader for our program and is a perfect example of how I want my players to act on the basketball court, in the classroom and at home.”


At 16-9 on the season, Wonderview is primed for another exciting post-season run.


“We defeated the No. 1 2A team (England) in overtime,” Jones said. “We were down two points with 3.2 seconds left and we hit a running 3-pointer to win the game. We fought to the very end.


“Our goal is to be able to come together and play as a team, be able to mesh well with the ninth graders when they move up and to prove everyone that doubts us wrong.”


Jones has had to put a lot on her shoulders this year for Wonderview — the team graduated most of its production from last year’s squad.


“We lost seven seniors and 48 points per game to graduation, so I [have expected] Raegan to contribute more on the offensive end,” Simon said. “Raegan helped us at the point guard position last year and was a big reason why we were able to make it to the state championship game. She averaged 7 points per game, and her quickness on defense caused teams to turn the ball over, which led us to some easy baskets.”


Jones is quick to downplay her personal contributions.


“I’ve had few good games, but it’s not all about stats,” Jones said. “It’s about playing as a team and working together to obtain a win.”


Jones also plays softball for Wonderview. Off the court and field, Jones is involved in FCCLA, Beta Club and FCA.


“Raegan contributes to the community by helping others,” Simon said. “She comes from a family of eight, but every year they pick two children from an Angel tree. Raegan and her siblings help shop for them and wrap the presents. She finds joy in knowing she helped someone have a nice Christmas. She also helped lead a project where her and a classmate painted the bathrooms in the Kindergarten and first grade classrooms. They painted the walls as well as positive quotes and pictures.”


Jones and Wonderview travel to Guy-Perkins this Friday at 6 p.m.