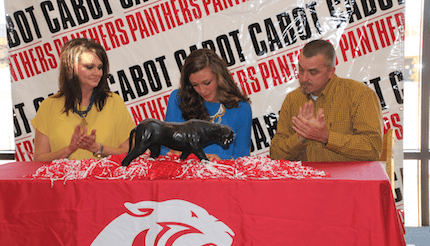 
Cabot High School’s Alyssa Hamilton will continue to play basketball, moving to the college level in the fall at Southern Arkansas University.

Alyssa was surrounded by family, friends, classmates and faculty during a recent signing ceremony held in the media center at Cabot High. Her parents are Crystal and Shane Smith and Chris and Christina Hamilton. She has four siblings.


“I have played other sports, but this is the only one that stuck,” Alyssa said, adding that she started playing basketball when she was 4 years old.


Alyssa said she has enjoyed most the family atmosphere of being on a basketball team. During her signing, she thanked her teammates for pushing her in practice.


Her advice to other young people interested in playing on the college level is to work hard. “It’s not easy. It’s like a job. You have to work on it every day.”


The Cabot center also considered playing at Lyon College, but she “just knew” that SAU was the right place for her when she visited campus. She hopes to become an occupational therapist.


During the signing, Alyssa expressed appreciation to her coaches and family for “making it possible for me to be the best I can be.” She also thanked God for blessing her with the ability to play basketball. “This is just a blessing,” she said. “It’s a God thing, it’s not me.”