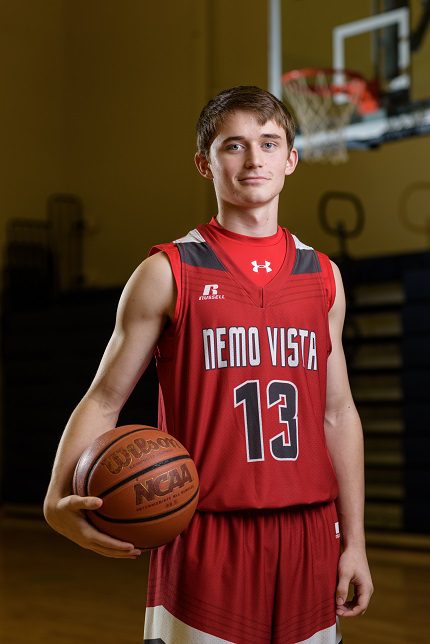 
From a young age, Nemo Vista point guard Ethan Hill always had big dreams of playing basketball on a big stage. Midway through his final season with the Red Hawks, the senior dreams of closing out his high school career with a return to the Class 1A state tournament.


Hill was selected to this year’s 501 Basketball Team — 37 players representing the best the 501 has to offer both on and off the court. The team is sponsored by Conway Ortho and Sports Medicine, Conway Regional Health System and First Security Bank. Hill was nominated by his head coach, Drew Blocker.


“Ethan is unselfish and works as hard as anybody,” Blocker wrote in his nomination. “He is always willing to shoulder the load, and with his leadership and ability to shoot the ball, he is like having another coach on the floor.”


As the Red Hawks (6-15, 2-4 Class 5-1A North) dive into the heart of conference play, Nemo Vista hopes to utilize its senior leadership, including Hill, to take down a conference rival this week.


“Sacred Heart is all about bragging rights,” Hill said. “We all know each other. I was injured the last time we played, and I didn’t get to play. It will be a battle of the boards. They have a few really big guys, and we’re not the biggest team around. They can shoot the ball pretty good, too. It will be a test for our defense.”


With most of the conference largely undecided, Hill sees each day as an opportunity to grow both himself and his team.


“I always try to be the hardest worker in the room,” Hill said. “I try to be the first one to practice every day and the last one out. I’m just trying to be the best Ethan Hill that I can be. If I’m better, the team is better. We’re working hard every day and pushing each other to all get better.”


“Ethan has played a vital role on the team for the past two years,” Blocker wrote. “Last year, he started nearly every game for us except one due to injury. The game plan for most teams in our conference is to stop him first. I expect him to have a great year this year.” Off the court, Hill enjoys golf, hunting, fishing and hanging out with friends. In the classroom, the senior is involved with Beta Club, FFA, FBLA, FCA, FCCLA and Gifted and Talented. In the future, Hill plans to pursue a Biology degree at Arkansas Tech University in Russellville.

“Ethan is active in the school community and is an overall nice kid,” Blocker wrote. “He works as hard in the classroom as he does on the court. He takes advanced classes on top of all of the other things he is involved in. He does everything the right way.


“I am not sure that you will find a better, more-respectful young man than Ethan Hill. He is truly a joy to be able to coach.”