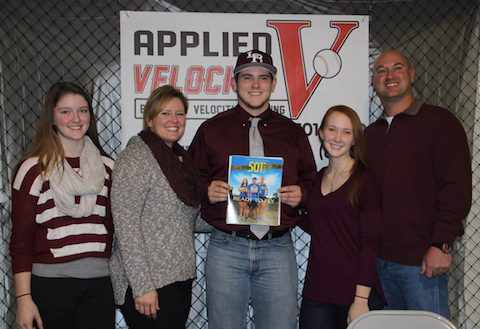 
Conway High School baseball standout Bubba Carter was “Loving LIFE” on Sunday after signing a national letter of intent to play baseball for the University of Arkansas at Little Rock Trojans.

About 80 attended the signing ceremony, held at the Applied Velocity Baseball Training facility in the Springhill community near Greenbrier. Bubba’s family – parents Salina and Billie Carter, sisters Tori and Kennedy and nephew Jaxson – sat next to him as he signed.


“If you know us and know our family, to God be the glory,” said Billie, thanking those in attendance for their support. “Everyone in this room today has been a positive influence in Bubba’s life and a part of his journey and what a journey it has been.”


Billie shared that Bubba began playing baseball when he was 5, adding that the journey has been paved with “friends, family, memories, hotels, severe cold, extreme heat, long drives crammed in a van and life’s lessons.”


Several of Bubba’s former coaches spoke, offering their congratulations as well as stories about his play over the years. They included Bobby Starr, Jason Adams and Joe Fitts. “Bubba is the guy that comes in and wants to work harder than anybody else,” Joe said. “He’s the guy who always has a smile on his face. He’s the guy who asks ‘What else can I do coach?’…He’s the guy I can always count on when I need anything.” 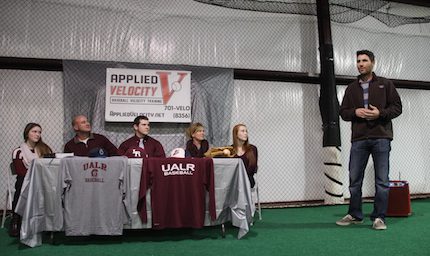 Cody Clark, a catcher for the Kansas City Royals, also spoke at the signing ceremony. He met Bubba when he was about 11 and gave him catching lessons for about four years. “First thing I noticed was he could play and was a strong kid. He was willing to learn…He was like a sponge. He took everything in,” he said. “UALR is getting a really great baseball player but even a better guy.”


A pitcher since 2013, Bubba has been a two-year starter for the Conway High School Wampus Cats. He has been recognized with various awards including First Team All Conference.