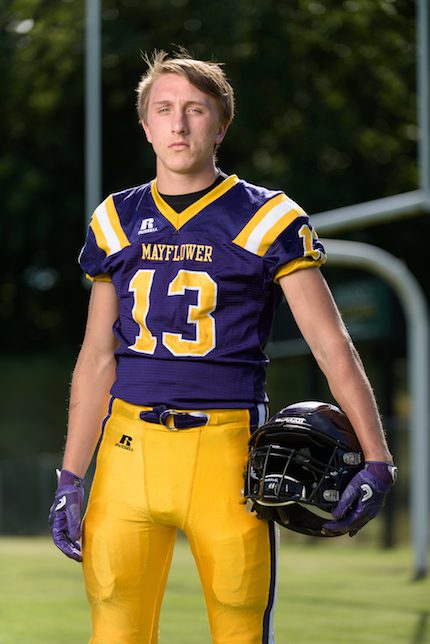 
Each time Mayflower linebacker/receiver Turner Hudson hits the field, the senior remembers what it was like being on the other side of the fence on Friday nights.

“When I was younger, I remember going to high school football games and wanting to be just like the players on the field,” Hudson said. “It’s what made me start playing the game. Today, I’m one of those players I looked up to as a kid. Now, my biggest goal is to make sure I’m a positive leader for my team and my school so that one day, one of those kids watching on Friday nights can be where I am today.”


Hudson was selected to this year’s 501 Football Team — 25 players representing all 11 counties of the 501. The team, which boasts the best the 501 has to offer both on and off the field, is sponsored by Conway Ortho and Sports Medicine, Conway Regional Health System and First Security Bank. Hudson was nominated by his head coach, Todd Langrell.


“Turner is tough, smart and plays with heart,” Langrell wrote in his nomination. “He has a high football IQ and is always in the right spot. He has a natural nose for the football and is like a coach on the field.”


Last week, Mayflower opened the season with a win, dispatching Central Arkansas Christian, 50-15, at War Memorial Stadium. For Hudson and the Eagles, the goal is to finish the season right where it began.


“Getting to play at War Memorial Stadium was awesome,” Hudson said. “It’s where we started our season, and it’s where we want to finish our season. Against Central Arkansas Christian, we scored first and never took our foot off the gas. If we can continue to do that against our opponents this season, we’re going to be playing at War Memorial Stadium again in December.”


Over his tenure with the Eagles, Hudson has built quite the impressive resume. However, the senior looks to add one more brick to his wall of fame — triple digit tackles.


“I had 95 tackles last year,” Hudson said. “If one of our games hadn’t gotten cancelled, I believe I could have reached 100. This year, I’m focused on doing my job, getting my reads right and flying to the ball. I believe I’ll get there this year.”


Turner’s leadership on and off the field has earned him a unique nickname in the Mayflower fieldhouse.


“We call Turner the ‘Future President,’” Langrell wrote. “He leads by example, and you know he is always doing the right thing. His strong work ethic can be seen in the classroom as well as the weight room. He doesn’t take days off.”


Off the field, Hudson participates in the long jump and long-distance events in track and field. The senior is also a member of Beta Club, National Honor Society and Robotics. He’s also the Student Council President.


“I’m really enjoying Robotics this year,” Hudson said. “We’re building a robot and getting ready for competition. The building process is great because you get to learn each other’s skills and strengths. There’s a lot of teambuilding involved, just like football. Whether you’re a veteran or someone, like me, who’s new to it, both are equally important to the team.”


Hudson was selected for the Faulkner County Youth Leadership Institute and American Legion Boys State. He attends the youth group at Turnpointe Church of Conway.


“Turner is actively involved in his church, school and community,” Langrell wrote. “He is a straight-A student and is a great classmate for the same reason he is a good teammate — he is ‘all in.’”


After high school, Hudson plans to pursue a future in engineering.


“I like math and I like building things,” Hudson said. “I’m really good at both and can’t wait to go to college and see what I can accomplish.”