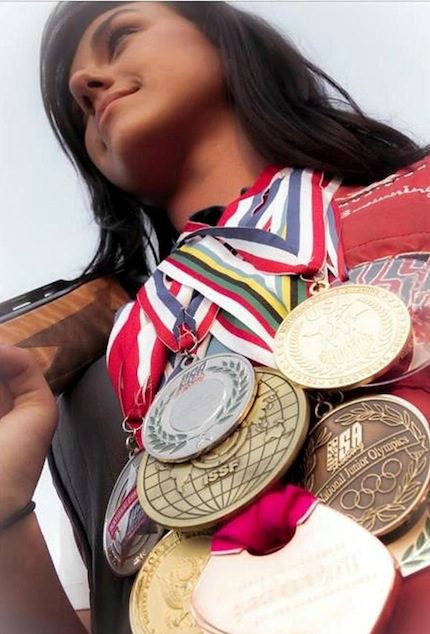 24 Oct 2012 Browning shoots among the best of world's shotgunners

In an intense competition of the world’s best trapshooters, including several Olympic medallists, Kayle Browning of Wooster had no trepidations. She broke clay targets with the best of them in faraway Slovenia.


That is in southeastern Europe, one of the nations of the former Yugoslavia.


In a field of shooters from all over the world, Browning had rounds of 23 of 25, 23 of 25 and 21 of 25 to make the finals of the event. She broke 17 of 25 in the finals for the sixth spot. She was the only non-European shooter in the finals. The winner was Finland veteran Satu Makela-Nummela who hit an impressive 93 of 100 in the shooting. Browning finished with 84 of 100.


Browning and her American teammates had to overcome jet lag, a seven-hour time difference and the considerable pressure in the trapshoot. And the food was different too.


“They didn’t serve biscuits and gravy,” Browning said with a smile.


She didn’t offer it as an excuse, but she had several “no birds” in the final round. That is when targets are broken as they come out of the throwing machine.


She used her familiar Krieghoff shotgun, the firearm that she has fired thousands of shells with in practice and in competitions.


Browning, who recently turned 20 years old, has been shooting since she was a young girl under the tutelage of her father, Tommy Browning, a veteran competitive shooter himself. Kayle Browning is an alumna of the Arkansas Youth Shooting Sports Program of the Arkansas Game and Fish Commission. She competed for Greenbrier High School.


This was Browning’s second appearance in the ISSF finals. She said, “I felt the jet lag when we got over there, but in the finals, I felt fine. I had good focus. When the shooting starts, I don’t have anything else on my mind.”


The other finalists were familiar to Browning, and they included gold and silver Olympic medalists from 2012 and from 2008. “We are good friends. There are no head games with us. When the shooting is over, we go out to dinner together.”


She added, “It is always an honor to compete in the World Cup. I am happy with my sixth place.”


Browning has only a short rest, then she will be in competition again, this time in Kerrville, Texas, trying for another berth on the American team that will compete in the next World Cup.


In the meantime, she is building a house.


It is just down the road from where she lives with parents Tommy and Tammy Browning. “My house is next to our shooting range,” she said.

(Story and photo courtesy of the Arkansas Game and Fish Commission)