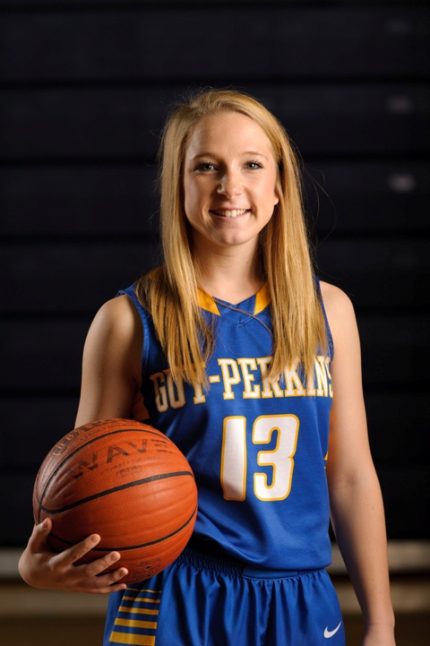 
On the court, Nikki Brown uses her voice to lead the Guy-Perkins Lady Thunderbirds from her point guard position. Off the court, her voice is making an even bigger impact — bringing joy to the elderly.


“Nikki is a member of Sardis Freewill Youth Group,” said Coach John Hutchcraft. “She volunteers many Sunday afternoons singing to the elderly at the nursing home.”
Brown, a junior for Guy-Perkins, was selected to this year’s 501 Basketball Team — 35 players representing the best the 501 has to offer both on and off the court. Brown was nominated by her head coach, Hutchcraft.


“Nikki is an experienced guard,” Hutchcraft wrote in his nomination. “She is a great 3-point shooter, and she handles the ball well under pressure. She handled the ball pressure well and was the second-leading scorer of the season [last year]. She’s a high-intensity player and usually averages 20 points a game.”


Brown has been playing basketball since the third grade and jumped into the sport thanks to her older sibling.


“My brother — I watched him play, and I wanted to be just like him,” Brown said. “This year, I’m working to better myself and have fun. As a team, we want to work together, get along and have fun and not be afraid of bigger opponents. I’m really looking forward to playing Nemo Vista because they are a talented team.”


Nemo Vista, a fellow 1A 5 North foe, has won back-to-back championships, and Brown and the Lady Thunderbirds aspire to take down the champs this year. Nemo Vista won the first matchup of the season, 71-44, back in November.


“They are a talented team,” Brown said.


The Lady Thunderbirds will get a chance at revenge in the new year, but next up for Guy-Perkins is Conway Christian. Brown and crew will play up in conference by traveling to Conway Christian tonight.


Brown also plays golf and softball for Guy-Perkins. Outside of sports, Brown is a member of FBLA.


“She serves on several committees for the junior class,” Hutchcraft said. “Nikki has a great personality and a big smile. She’s an overall good student.”


Approximately halfway through the season, Brown and the Thunderbirds are still learning.


“We’re playing together, and really getting to know one another,” Brown said.


Hutchcraft is confident in his junior point guard and is looking to her to lead the way.


“Nikki always encourages the other players, and she never gives up,” Hutchcraft said. “I expect Nikki, as team captain, to step up and lead her teammates to a very successful season.”