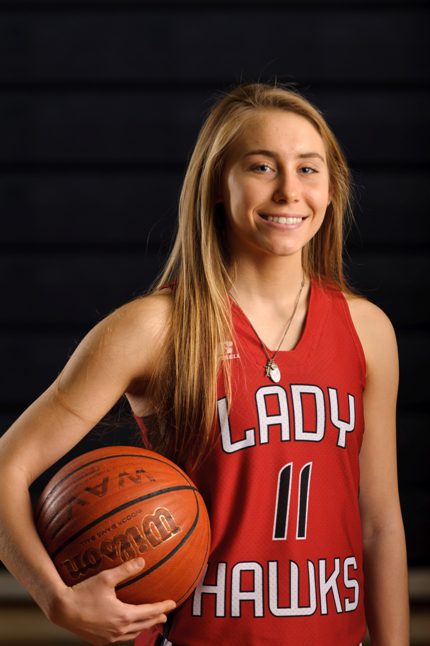 
Jacie Andrews is a two-time champion with the singular focus of moving the number of rings up to three.


The senior guard leads the Nemo Vista Lady Red Hawks who are poised for another deep post-season run after winning the 1A championship the past two seasons.


“I’ve been playing ever since I could pick up a ball,” Andrews said. “My sister and parents all played, so I wanted to play just like they had always done.”


Andrews was selected to this year’s 501 Basketball Team — 35 players representing the best the 501 has to offer both on and off the court. She was nominated by her head coach, Kyle Payne.


“Jacie is an extremely great shooter that teams must be aware of at all times,” Payne wrote in his nomination. “This helps free up our other shooters and athletes as well. Jacie has a very high basketball IQ and strives for perfection at everything. She has put in an endless amount of time this offseason and preseason getting stronger in the weight room and working on attacking the basket off of the dribble.”


Andrews was a co-captain for Nemo Vista last season, contributing 8.1 points and 1.7 assists per game to help push the Lady Red Hawks to a second-straight championship.


“I [have expected] Jacie to be a true genuine leader this year and be a representation of what I want the basketball program at Nemo Vista to be for years to come,” Payne said. “[She has been] more aggressive on both the defensive and offensive ends of the court this year, knocking down big shots when called on.”


At 24-2, everything has seemed to be clicking for Nemo Vista. The Lady Red Hawks hosted cross-county and 1A 5 North rival Wonderview on Tuesday, defeating the Lady Daredevils, 56-39. The court represents fun for Andrews. It’s a place to escape from the realities of life.


“My favorite basketball memory is winning a state championship after we had lost my cousin, Sophia, and my friend, Cameron,” Andrews said. “Dealing with the loss of my cousin at the beginning of the season was probably the hardest challenge. My mother was diagnosed with congestive heart failure last year during the season, and it was difficult to overcome. She is much better now.”


The Lady Red Hawks have faced the classic challenge that all reigning champions face — complacency. One game in particular this season helped bring Nemo Vista back to life and shake off the complacency.


“The team played best against Rose Bud this year (a 59-44 win back in December), and I think that game really reignited a spark in my teammates and me,” Andrews said. “Everyone contributed, and we meshed together well.”


In addition to her contributions on the basketball court, Andrews also plays softball and runs track and cross country for Nemo Vista. She is a member of Beta Club, FCCLA, Future Business Leaders of America, Fellowship of Christian Athletes, the environmental committee and the library club.


Andrews volunteers for Harvest of Hope and Action Services, and she also helps with the clothes drive at St. Joseph’s parish. Andrews was also recently named as one of the four Conway County Youth Citizens of the Year.


“Jacie is a great role model for all of our younger athletes athletically and academically,” Payne said. “She is a player who always makes good choices that will not jeopardize her team or future.”