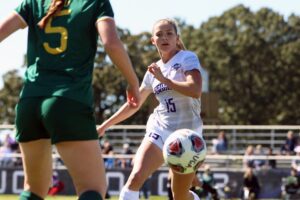 Bassett has a 3.51 grade-point average in communication science and disorders. Bassett was the Southland Conference Player and Forward of the Year this season and is a two-time All-Midwest Region selection by United Soccer Coaches. She set a UCA school record with her 40th career goal in UCA’s 5-2 SLC Tournament victory over Northwestern State and tied the school record with 92 career points.

Dickinson, from Cabot, has a 3.16 grade-point average with an undeclared major. Dickinson had three goals and four assists in 19 starts and earned first-team All-SLC honors as a sophomore.

Tidd, from Peoria, Ariz., has a 3.95 grade-point average in biology. She scored three goals and tied for second on the team with six assists while coming off the bench.

“As a staff, we pride ourselves on our players being strong student-athletes,’ said UCA head coach and SLC Coach of the Year Jeremy Bishop. “We want all of our players to perform on the field at a high level, but more importantly we want them to perform at a high level in the classroom. Our team GPA is always very high and we’ve been able to achieve success on the field as well, that’s what it’s all about.

“I couldn’t be more proud of our team in this regard and am particularly proud for these five for being recognized as great student-athletes.’

UCA finished 16-4-1 overall – a school record for victories – and 10-1 in the Southland Conference, winning its second SLC title in the past three seasons.

Southland Conference All-Academic Teams are voted on by a head coach, sports information director and academic/compliance staff member from each school. Student-Athletes of the Year are voted on by an awards committee which consists of one administrator from each member school. Voting for one’s own athletes is not permitted.

To be eligible for all-academic distinction, an athlete must hold a minimum 3.00 cumulative grade point average through the semester prior to the sport’s championship, completed at least one full academic year at the nominating school prior to the current season, and participated in at least 50 percent of the team’s competitions during the most recently completed season.