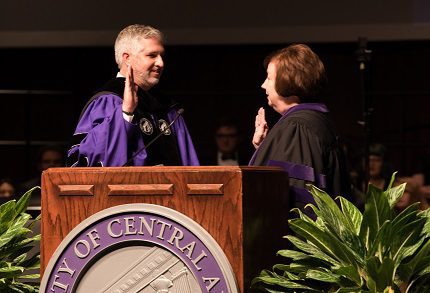 The University of Central Arkansas hosted the investiture of Dr. Houston D. Davis as the 11th president Thursday, Oct. 26.

“This is a great day of celebration. The UCA Board of Trustees is thrilled to have Dr. Houston Davis as our leader and looks forward to what the future holds,” said Elizabeth Farris, board chair. “Our campus is proud to have the privilege of hosting this investiture for Dr. Davis.”
Gov. Asa Hutchinson and presidents and chancellors from other Arkansas higher education institutions and systems were on hand for the investiture.


“The UCA Board of Trustees made an outstanding choice in its selection of Dr. Houston Davis as its new president. He has already proven himself to be a truly effective leader and advocate for UCA,” said Hutchinson. “Under his leadership, I know UCA will continue to be a leader in higher education and a critical part of our state’s economic future.”


Davis joined UCA in January. Prior to coming to UCA, he served as interim president of Kennesaw State University from June to November 2016.


“Among the reasons for my application to UCA was an interest in becoming a part of a university that was not afraid to be innovative and still appreciates the transformative difference that we can make in students’ lives,” Davis said to the investiture crowd.


Hershila Lallu, president of the UCA Student Government Association said, “As UCA students, we are proud of our beloved institution that we also call home. We know that President Davis is dedicated to all UCA students and the continued progress of the university. His investiture today helps us move into our next era of success.”


The investiture comes as the university celebrates its 110-year anniversary after being founded in 1907 as the Arkansas State Normal School.

The school became Arkansas State Teachers College in 1925; State College of Arkansas in 1967 and became the University of Central Arkansas in 1975.


“All the faculty, staff and students that came before us wrote the chapters of UCA’s 110-year history that we build upon today,” Davis said.


In addition to his past professional duties, he served in the role of director for the National Educational Needs Index project, a Lumina-funded initiative measuring educational, economic and population pressures in the 50 states that influence policy and planning at local, regional and national levels.


Davis is also involved in research projects and writing in higher education governance, economic development and accountability issues, and serves on several national advisory groups on higher education policy, degree completion, academic preparation and accountability. He received his doctor of philosophy in education and human development at Vanderbilt University and his master of education in educational administration at Tennessee State University. Davis earned his bachelor of science degree in political science at the University of Memphis.