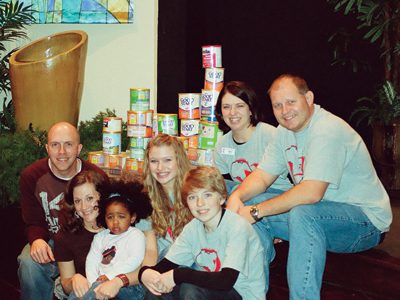 The infant’s death has touched the Conway teen in a profound way and she is working to ensure other children don’t die waiting for a chance at a healthy life.

Ansley’s aunt and uncle, Laura and Tymm Hoffman of Atlanta, Ga., had considered adoption from China but felt God spoke to them about Ethiopia. During the adoption, they received a photo of Brighton. “They fell in love with it as soon as they got it,” said Ansley, a daughter of James and Stacy Mathis.

Unfortunately, the child died before the adoption could be completed and the couple could travel to Ethiopia. “It was really hard,” Ansley said, fighting tears as she recalled the evening her mom told her about the child’s death. “It was horrible…really heartbreaking.”

Although grief-stricken, the Hoffmans continued with hopes of adopting another child. Her name is Meron, which means “gift from God,” according to Ansley. “They got her and fell in love.”

Still, the couple was heartbroken with Brighton’s death. A couple in their church had a similar experience, losing a child they had named Kennedy. “She passed away for the same reason.”

The two couples joined forces to help provide baby formula to combat malnutrition in the country while also reaching out to other orphanages. Baby formula is purchased and shipped to an orphanage in Ethiopia.

Ansley recalls that one night she was thinking about her family’s loss and the foundation, and it occurred to her that her church – First United Methodist in Conway – could get involved and help. She approached youth minister Michelle Moore and the church youth council. “They loved the idea.”

Ansley even asked that instead of birthday presents that she be given baby formula to donate.
“I had no idea it would get that big. I was amazed with how well we did,” Ansley said. “Everyone got so involved. It was a blast.”

The Hoffmans had already planned a visit to Conway, which happened to coincide with the completion of the fundraising project. Ansley and other youth presented the purchased baby formula in services at First Methodist.

Ansley’s goal was for the church to collect 50 cans of formula, but members raised enough to purchase 263 cans of formula, which surprised Ansley. “The amount blew me away and blew my aunt and uncle away too. It was awesome,” she said. “I had no idea it would get that big. It was amazing.”

“That is three babies being fed for 1 year and 3 months – right up to transition off of formula!”

While there was some hard work involved, Ansley was particularly pleased with the result. She hopes other churches will hear about the project and participate in the effort to purchase baby formula.

“It was an amazing experience. We have a wonderful community and a wonderful church. It was fun too,” she said. “It felt awesome that we were helping those babies over there. I can’t get over it.”