Members of the Conway Fire Department will be sporting a new, patriotic shirt that celebrates “A Century of Service” – a design created by St. Joseph School sophomore Nicole Moix.

The department received about 200 entries for the commemorative design.  Members of the anniversary committee were pleased with both the number of entries and the quality.


Other winners were Rachel Briggler, St. Joseph School; and Bailey Guynes, Carl Stuart Middle School. Nicole’s design now appears on shirts that will be worn by on-duty Conway firefighters. Shirts will also be available for purchase at the Central Fire Station for $10 (check or cash only). Adult sizes and a limited number of youth sizes are available.


According to Conway Fire Chief Bart Castleberry, the city of Conway created the fire department by resolution on April 11, 1912. Prior to that, when a fire occurred there was no organized response. “It was just neighbor helping neighbor,” explained Castleberry.


In addition to the T-shirt contest, the department has planned a variety of activities to celebrate the 100th anniversary of the Conway Fire Department. 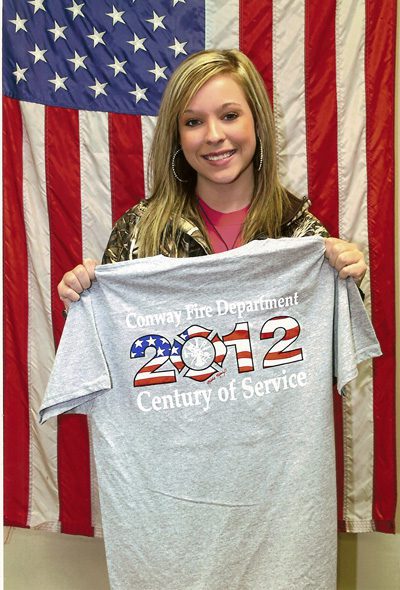 An anniversary celebration is planned 11 a.m. to 3 p.m. Saturday, April 14, in Downtown Conway. It will feature local entertainment, food and activities for children. The department is planning to offer a modified course of its “Crawl, Drag and Squirt,” an annual competition among elementary schoolchildren during Toad Suck Daze.


Fire department vehicles and equipment will also be on display.


Local businesses and groups are invited to participate in the downtown event by setting up booths and distributing free items.


Several activities are planned in advance of the April 14 celebration.


A series of open houses are planned throughout the city at each of the fire stations, according to assistant chief Mike Winters. The events will give residents an opportunity to meet the firefighters who work at their neighborhood station.


The open houses – which will include a free lunch, blood pressure and cholesterol checks – will be held 11 a.m. to 1 p.m. on:


Other activities in the works include:


A 9/11 memorial featuring a piece of steal from the World Trade Center. Any money raised during the anniversary celebration will be applied to the cost of the memorial.
A 5K or 10K run.
A Conway firefighters cookbook.


As a promotional flyer states, “Throughout 2012 we will reflect upon our past, celebrate our present and take the opportunity to look forward to the next century of service for our community.”