From Alaska to Arkansas, basketball has always been a part of Stormy Stacks’ life.

“When I lived on an island in Alaska, going to the gym and playing basketball was what everyone did,” Stacks said. “That’s how I started with basketball, and I automatically loved it. My parents were born and raised in Arkansas. My sister and I were born here also, and all of my family lives in Arkansas. My parents just decided to pack up and move to Alaska to teach when I was a year old. We lived on an island in the Bering Sea, Saint Paul, for almost 12 years.” 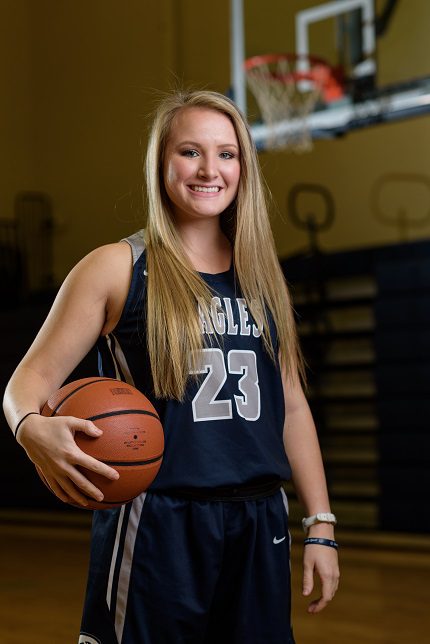 Stacks, a senior forward for Conway Christian, was selected to this year’s 501 Basketball Team — 37 players representing the best the 501 has to offer both on and off the court. The team is sponsored by Conway Ortho and Sports Medicine, Conway Regional Health System and First Security Bank. Simmons was nominated by her coach, Jamie Williams.

“Stormy is very physical, has an ability to get to the rim and create contact, and moves well without the basketball,” Williams said. “Stormy is a strong senior leader on the floor and my main post player on the court.”

At 5-foot-8, Stacks is commonly facing bigger competition each night on the court.

“I’ve had to work very hard to be stronger and smarter than my opponents,” Stacks said. “It’s my last season, so my goals are to push myself and my team every single day to get better. Most importantly, I want to be a Christian role model on and off the court.

“Making the state tournament the past two years was a great experience. Being able to share that with some of my best friends and the memories that we made are something I’ll never forget.”

While Stacks (who is averaging 20 points and eight rebounds per game) is formidable for Conway Christian in the post, she also gives the Eagles an additional weapon with her shooting range.

“She causes a lot of distraction down low,” Williams said. “But she was also my leading 3-point shooter last year. She’s able to be a threat behind the 3-point line and in the paint with her physicality.”

Next up for Conway Christian is cross-town rival St. Joseph. Back in December, the Eagles earned a win at home, 34-32.

“That was only our second home game of the year, so as a team we were a little bit out of sync,” Stacks said. “We realized very quickly that their strength was in the post, so we had to switch to a zone in order to cover that better. On defense, our guards did a good job of controlling the drive and getting out on 3-point shooters. Offensively, we handled the ball well and were able to attack the basket. That win was definitely huge for us.

“In order for us to win Friday, we all have to work together and limit our amount of turnovers. We have to take our time on offense and be smart every possession. Because they are bigger than us, we have to be strong with the ball and rebound.”

Off the court at Conway Christian, Stacks is involved in choir, praise team, girls ensemble, Beta Club, drama club, history club and National Honors Society. She also serves as a teacher’s aide. The senior plans to attend college this fall and major in elementary education. Her experience with Williams the past two years might even lead to a more specialized role.

“I may even study to be a coach — whatever the Lord has planned for me,” Stacks said. “Coach Williams is great, and being able to play for her these past two years has been awesome. She pushes me every day to be a better player and leader. Her love for basketball is undeniable. I appreciate her so much for all the time, effort and love that she pours into all of her players.”