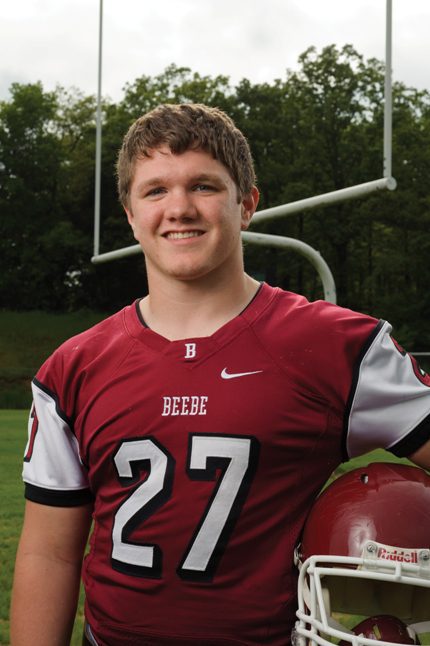 07 Oct Smith's patience pays off on and off the field


The Beebe Badgers have had an uneven start to the 2015 season. Halfway through, the Badgers are below .500 with a 2-3 record (1-1 in 5A Central play). But, no worries. The Badgers have been here before.


After starting the 2014 season 0-4, the Badgers turned things around and found themselves all the way to the 5A semifinals. The Badgers have their eyes set on a return deep into the playoffs and will ride the ground game all the way there. One of the Badgers’ stud running backs is senior Trip Smith.


Smith, a senior fullback for Beebe, was selected to this year’s 501 Football Team — 27 players representing all 11 counties of the 501. The team boasts the best the 501 has to offer both on and off the field. Smith was nominated by his head coach, John Shannon.


“He is one of the best running backs I have ever coached,” Shannon wrote in his nomination. “He will set the all-time rushing record at Beebe. He has been all-state the last two years. Last season, he was our workhorse. He led the team in rushing and touchdowns. He is one of the best all-around kids I have ever coached. He always has a smile on his face, and he is always there for his teammates.”


Smith rushed for 1,643 yards and 18 touchdowns last fall, and he’s well on his way to another stellar year. In Week 1 against Greenbrier, Smith rushed for 169 yards, and he followed that up with 119 yards in Week 2 against Lonoke.


Beebe travels to Pulaski Academy this Friday. Smith and the Badgers will have a tall task to take down the Bruins, but Smith lives for those kinds of games.


“I like beating teams that you’re not supposed to beat,” Smith said. “Last year, when we beat Sylvan Hills, they were undefeated when we played them. That was awesome.”


Smith possesses a rare combination of explosive speed and strength. These traits serve him well in track and field, too, for Beebe. Smith runs the hurdles, various sprints and throws the shot put.


Smith’s off the field talents are also impressive. He’s a member of Beta Club and president of the Math Club.


“Trip tutors his peers at school through the Math Club twice a month and his friends at home whenever they need it,” Shannon said. “He excels in math and science, which makes him knowledgeable, but he has an understanding of varying abilities because of his relationship with his brother with special needs.


“He is a very smart student. He is one of the best math students in the state of Arkansas. He is patient beyond measure, being the big brother of two siblings. He spends all of his free time playing with and looking after his little brother Dallas, who has special needs.”


Smith also gives back to his community through regular volunteer service.