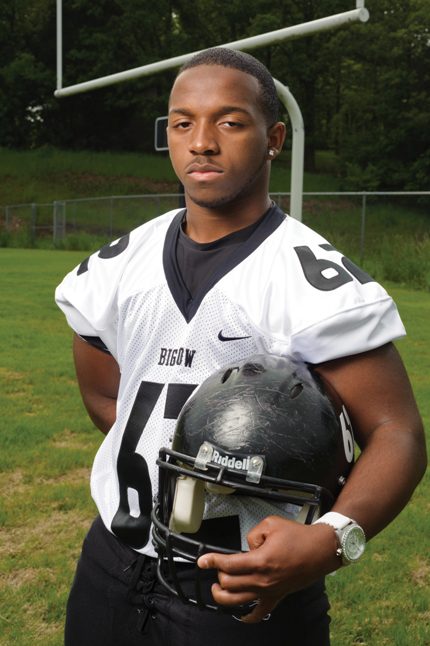 
“I’m stronger than I look,” Grider said. “I’m a little shorter than most guys, so it means that I’m a little faster than them, too. I have a little muscle on me, and I use my strength to drive against my opponents. Playing nose guard just makes sense for someone like me. As a team, when we make big plays, our opponents usually don’t see it coming.”


Grider is a member of the 2015 501 Football Team — 27 players representing all 11 counties of the 501. The team boasts the best the 501 has to offer both on and off the field. Grider was nominated by his coach, Jeff Starks.


“KJ’s motor runs all the time, and he has a ‘don’t give up’ mentality,” Starks said. “He is well-mannered, very respectful and quick to think about others. He is one of the friendliest young men I’ve ever coached.”


In 2014, Grider impressed defensively for the Panthers, racking up 70 tackles and adding four sacks, earning him all-conference honors. This year, the senior expects even more out of himself on the field.


“I always strive to be better than I was the year before,” Grider said. “With every game, I try to just get out there and help my team out in any way that I can. In order to do that, I need to get better as a leader. If your team has good leadership, then it allows your team the opportunity to get better and to go farther.”


For Grider, the motivation to take the field comes from watching his siblings don the Panthers uniform every Friday night.


“I’m the last of four Grider brothers to play at Bigelow,” Grider said. “I’m the baby. When I was in junior high, I saw all my brothers playing and I decided that I had what it took to be one of those guys who suited up for the Panthers. I haven’t been playing the game long. Although it’s been crazy, I’ve loved every second of it.”


“KJ is a ton of fun in a small package,” Starks said. “He leads and motivates both verbally and by example, works hard and expects his teammates to as well. He is always there with a positive remark or uplifting suggestion for others and is always wearing a smile.”


Squeaking into the Class 2A playoffs a year ago with the 5-2A conference’s fifth seed, Grider believes that a couple of key match-ups along the way may determine Bigelow’s outlook for the new season ahead.


“Two of the big games we are looking forward to are Conway Christian and England,” Grider said. “We play in a really competitive conference, and Conway Christian is one of the better teams that we play against. England shut us out last year, and we want to get back at them. Coach Starks tells us to always win first and win last. Although we should focus on getting every win, it’s important to go into tough games hungry for the big win. That’s the mentality that will carry us on into playoffs toward a state championship.”


Off the field, Grider is actively involved with Future Business Leaders of America, Spanish Club and Student Council at Bigelow. The senior also participates in track and field, throwing the shot put and discus.


Bigelow opens its season on the road this Friday at cross-county rival Perryville.