14 Nov ‘Sky is the limit’ for Wood, Conway Christian Eagles 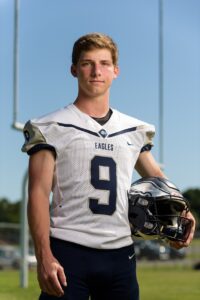 Jacob Wood knows that the next time he steps on the gridiron could be his last. However, Conway Christian’s senior high quarterback isn’t ready to say goodbye to the game he loves.

“This season has been something that I’ll never forget,” Wood said. “The guys I get to play with every week and the coaches we have and the freedom they give me has made my experience unbelievable. The success we’ve had makes it that much better. If we can make a deep run and possibly win it all, that would be the icing on the cake in my senior year.”

With a plethora of playoff experience under his belt, Wood remembers the first time he experienced the postseason.

“I’ve been playing football for as long as I can remember,” Wood said. “My older brother and I would always play in the backyard. I grew up watching him play, and I wanted to be just like him on the field. As a freshman, I got to move up and play in the playoffs with him when he was a senior. We reached the semifinals that year. It was one of my favorite football memories.”

Wood has passed for 1,608 yards and 28 touchdowns this season, while adding 832 yards and 18 scores on the ground. The dual-threat quarterback leads by example and works hard to give his teammates opportunities to be successful.

“The one thing that I want people to know is that I want others to succeed,” Wood said. “As a quarterback, you have to be the anchor for your team and keep a level head. This year, one of my goals was to get each of my four starting receivers 500 yards by the end of the season. It’s something that I’ve focused on this year, and I’m still working on it.”

Wood was selected to this year’s 501 Football Team — 28 players representing all 11 counties of the 501. The team, sponsored by Conway Ortho and Sports Medicine Center, Conway Regional Health System and First Security Bank, boasts the best the 501 has to offer both on and off the field. The senior was nominated by his head coach, Justin Kramer.

“Jacob has high character and consistent leadership,” Kramer wrote in his nomination. “He is a great athlete, but very humble, and is always helping guys up. He is a good student who treats everyone with kindness.”

One of 16 teams remaining in the hunt for the Class 2A title, Wood and the Eagles have their sights set on the top prize.

“I believe that the sky is the limit for us,” Wood said. “We have a favorable draw this year. There is no room for error. You have to come out every week and play your best. If we do that, I like our chances against anyone in the state.”

This season, the high-flying Eagles (9-2, 7-0 Class 5-2A) swept through conference opponents en route to the team’s first conference championship since 2014.

Following last week’s 40-6 playoff victory over Lavaca, the Eagles take an eight-game winning streak into the second round with a match-up against Fordyce.

“At this point in the playoffs, everyone is good and no game is easy,” Wood said. “Fordyce will be the fastest defensive team that we’ve seen. They are talented on both sides of the ball. This week, we are focusing on not being predictable. We want to keep them guessing and keep them on their heels as much as possible. We feel like we’ll have a lot of success if we get that out of them.”

A win this week could set up a juicy quarterfinals rematch with Mount Ida — a team that Conway Christian has been itching to get revenge against.

“Mount Ida has put us out of the state playoffs the past two seasons,” Wood said. “For our team, it’s personal. A rematch with them is really enticing for me as a player and for our team. We can’t look past anyone, however. We are trying to take it one week at a time. If you’re practicing and playing football on Thanksgiving week, it’s a blessing.”

Off the field, the senior is an all-conference athlete for Eagles baseball and basketball and participates in Beta Club, Future Business Leaders of America, Drama Club and National Honor Society at Conway Christian High School. When he graduates, the senior hopes to continue his athletic career at the next level.

“After high school, it has always been a dream of mine to play collegiate sports,” Wood said. “If the right opportunity was presented to me, I would be very interested in pursuing that dream. I would also like to study pre-veterinarian studies and work toward becoming a vet.”