Posted at 20:38h in Neighbors by Sonja Keith
Share 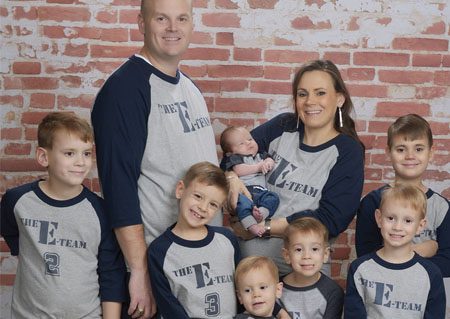 Titus Everett has a firm handle on what he wants to be when he grows up: “A preacher!” he announces. He’s already got the spirit for the job and the vocal pipes to go with it

Little Titus comes by his qualifications honestly. The faith part he gets from his folks, Jason and Sarah Everett, whose steady example and consistent witness have put God at the center of their lives. And as for that pulpit voice, well, when you’re smack in the middle of seven sons, you learn to speak up fast and loud.

“Neither of us dreamed that we would ever have a big family,” Sarah said. “But we love it. The Bible says they are a blessing and a reward, and we really view them that way.”

When Jason Everett first laid eyes on Sarah Kutilek, the two were attending a campus function at Baptist Bible College in Springfield, Mo., where they were both enrolled. He is originally from Greenbrier. Growing up, she lived in Ohio, Missouri, Tennessee and Kansas. Today, the family makes their home in Roland.

“We were on what was called brother and sister floors in our dorms,” Jason said. “And I went to a meeting one night and Sarah spoke to all of the boys, and I thought wow, she’s a real godly lady. She probably would never date me.

“Then a few nights later we went to Steak and Shake, and her and I got to sit with each other. Then she decided that she kind of liked me, and so then our friends connected us and I asked her out.”

Sarah, in turn, was attracted to her future spouse for the way he made her laugh. His impression of the college president cracked her up then and still does today.

They couldn’t have known it then, but it’s been those two elements — faith and a sense of humor — that would serve as critical ingredients to their marriage and their life as parents even when it looked like there would be no family at all.

“A little bit after we got married (in 2001), we decided we wanted to have children, and actually, we were infertile for six years,” Sarah said. “We lived in Missouri at the time, so we even went to St. Louis to infertility specialists, and we were basically told it was highly unlikely. Some doctors told us we would never have children because both of us had issues.”

During those six years, an adoption bid fell through, and the couple wrestled with the idea of fertility treatments. They moved to northwest Arkansas, where Jason opened his insurance agency, Everett Agency of Liberty National, and prayed for direction.

The rest, as they say, is history.

“We moved to northwest Arkansas, and six months after we moved, we found out we were pregnant,” Sarah said. “Totally God and basically just a miracle.”

When Joshua Everett arrived in January 2008, the couple couldn’t imagine any greater joy, but they’d soon discover the Almighty was just getting warmed up. Seven months after Joshua was born, the couple was pregnant with Caleb, and the brood has filled in steadily since. The current roster also includes Hudson, 7, Titus, 5, Silas, 4, Haddon, 3, and Paton, 2 months.

“We prayed to God for six years for just one child,” Sarah said. “We keep having boys.”

Day to day life at the Everett household runs with clockwork precision. All of the boys are responsible for general pickup and have a designated chore — “life skills” Sarah calls them — for which they are individually responsible. The kids partner up, allowing the older brothers to impart the finer points of laundry, emptying the dishwasher or other tasks to their young sidekicks.

With the help of an in-home tutor, Sarah homeschools her boys, and she isn’t shy about leveraging the family’s 40-acre spread as a means for burning off their abundant energy. Between caring for a variety of farm animals, four-wheeling and just running in the fresh air, it’s an idyllic setting for this most unique of families.

But perhaps the most ingenious thing Jason and Sarah have taken on, as suggested to them by a friend, is a system for ensuring each boy gets his share of uninterrupted one-on-one attention. Every night after bedtime, one of the boys gets a scheduled extra 30 minutes of time exclusively with Mom and Dad, time spent interacting and bonding.

“It’s like playing a game for them,” Sarah said. “We ask them questions like what’s their favorite food, their favorite color, anything they’re struggling with, anything we need to ask their forgiveness for or anything we can work on. Anything like that just to get that time with them.”

The extra time is highly coveted by the Everett boys. It’s also a privilege every member of the family respects and takes seriously.

“The other boys, if they get out of bed and get up to come interact, they lose their night. So, it’s motivation for everyone to respect that time,” Sarah said. “It’s really been one of the best things because they cannot wait until it’s their night.”

Even with the best-laid plans and regimens, life is demanding with so many kids to care for, but Jason and Sarah seem to take everything in stride. They’ve even trundled the entire company off on vacation and managed to return intact.

“I call myself the pack mule,” Jason joked of family trips.

The couple is quick to point out that their life and family can’t function without the help of others, moral support from their faith family at Summit Church and a healthy dose of Scripture in their daily lives. Even with the occasional hiccup — Caleb and Paton were each born at 37 weeks with complications, but are healthy now — the faith and laughter that brought Jason and Sarah together sustains them still.