Seems like only yesterday that we were embarking on our 501 LIFE adventure and unveiling the inaugural edition of the magazine that “Celebrates Greater Central Arkansas.” But, here we are, celebrating 10 years of working with our wonderful team and editorial boards to bring readers the stories and features about the people, places and things that make the 501 great.

Over the years, my business partner, Donna Spears, and I have been richly blessed and we don’t take that for granted for a minute. We have a great team, wonderful editorial boards and supportive advertising partners. For me, my work would not be possible without the love and support of my husband, parents, sisters, family and friends.

As we have worked on our May “Anniversary” edition, I have looked back on the last 10 years and reflected on some of the stories that we have presented. While I have enjoyed working on each story and issue, I’d like to share some that have been my favorites and have touched my heart.

While there are different aspects of my work that I enjoy, I love having the opportunity to meet men, women and young people in the 501, and tell their stories. I have always been a curious person. Mom calls it “being nosy” but I like to think of it as being inquisitive. It’s an important quality for a journalist. And yes, I am competitive and like to get a “good story” first. 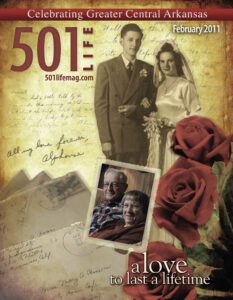 501 LIFE published one of the sweetest love stories in early 2011.

Mary and Al Hiegel are a real treasure. They attended St. Joseph School and fell in love but World War II delayed their marriage. Instead, Al enlisted when he was 17 and was deployed, prompting an exchange of more than 200 love letters between the two. They still have the letters and are still very much in love after 70 years of marriage.

Al Hiegel’s love letters written during World War II to his wife, Mary, have faded and turned fragile. Yet, the couple’s love affair has lasted a lifetime.

While away serving his country, Mary and Al began writing to one another. While aboard ship, Al wrote to Mary nearly every day. “Sometimes I wouldn’t hear from him for weeks and then one day I’d get a dozen letters,” Mary said. “I saved every letter he wrote.”

Al would sometimes sign his letters “I love you with all my heart” in French, using some of the foreign language he learned in school. “That’s the only French I know,” Al said. 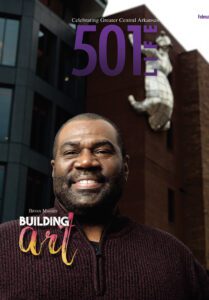 In our February 2017 edition, we featured Bryan Massey who overcame many obstacles – a serious injury, homelessness and even death threats – to realize his dream of being an artist Also, early on, he did not have the support of his family, yet he chased his dream.

In July 1982, Massey lost four fingers on his left hand in an accident involving a table saw while he was attending East Carolina State. “I couldn’t do any art or 3D for 18 months,” he said, adding that surgery was performed to re-attach what doctors could. “I could’ve quit but I didn’t.”

Having faith in God and being brought up in a Christian home made a big difference for Massey. “I think it makes a difference in anybody’s life,” he said.

“I could’ve given up a long time ago on a lot of things but I just decided not to,” he said. “I felt if I was going to do something with my life, I had to make the decision to do that. I couldn’t rely on people helping me or taking handouts. There were times I wouldn’t eat for four or five days but I wouldn’t steal. I’d rather go hungry than steal. That was the morals embedded into me by my parents.” 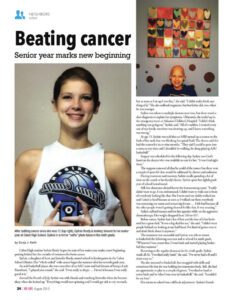 Everyone is going through something

In our August 2015 edition, we featured Sydnie Reedy, who was starting her senior year at Cabot High School. Growing up, Sydnie loved to play basketball and dreamed of being a Lady Razorback.

The summer before she started the eighth grade, she began experiencing dizzy spells, which led to a cancer diagnosis. Doctors removed as much of the tumor as possible from the back of her neck. She received chemo and radiation and returned to basketball and school for ninth grade. But cancer turned up during a monthly checkup in the 10th grade. It was inoperable and she resumed chemo.

For our story, Syndie talked about the difficulty of suffering a serious illness, including social interactions with friends who ignored her condition. She also shared her struggle with her performance on the basketball court. Once highly competitive, her teammates had surpassed her in skills.

The courage and bravery in which she shared her struggles was inspiring, and I still recall from time to time one of the stories she shared.

Sydnie has gained a different perspective since her cancer was discovered. She recalls how car rides to UAMS for treatment, not feeling well and every bump causing pain. Other motorists would honk and give them dirty looks. “You never know what is going on in someone’s life,” she said, offering some advice. “Love and be kind to every single person.” 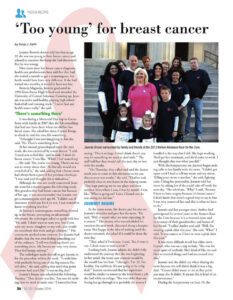 In our October “Health and Wellness” edition in 2016, we featured Jeannie Brown, who was told at age 32 that she was too young to have breast cancer by her physician, who refused to even examine the lump she had found. Health care professionals told her that had she waited a month to get a mammogram, her battle would have been very different. If she had waited two months, it would’ve been too late.

Following a lumpectomy, she met with her doctor to learn the pathology results. She was only given a 15 percent survival rate.

Jeannie has been surprised by the reactions that people have had to her battle with cancer. She thinks people are generally uncomfortable when confronted with someone who has cancer and aren’t sure what to say or do.

After she lost her hair, Jeannie got a wig but hated to wear it because her head was hot and itchy. “I didn’t think the wig made me look better or make me more comfortable. If I put a wig on, it was for somebody else’s benefit,” she said, adding that she did it for her nieces and nephews because they were accustomed to seeing Aunt Jeannie with long blonde hair. She would wear hats, but if it was hot, she opted to wear nothing on her head, which resulted in stares and sometimes people pointing at her.

Jeannie has considered writing a book about her experience and the “ridiculous things” that people have said. She learned that people will say “anything” regardless of how hurtful, but she just had to laugh. One person said, “Why don’t you wear a wig so people don’t have to look at that?” Her response was, “Guess what? Everything I’m going through with chemo, you don’t have to look at me. Look away. I have to do this stuff or I won’t be alive.” 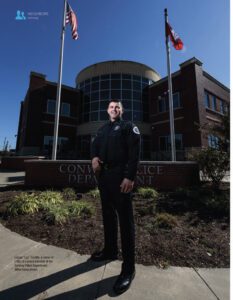 In pursuit of freedom

Another story which touched my heart featured Laz Castillo who left Cuba on a handmade raft in search of a better life in the United States. He spent 14 months in a refugee camp, overcame a language barrier and was nearly homeless. Today, he is giving back to the community he loves as a member of the Conway Police Department.

Laz shared details of his decision to leave Cuba, the conditions aboard the raft and the group’s rescue. He also detailed the challenging conditions he faced while a refugee at Guantanamo Bay for 14 months.

Looking back on Cuba, his journey to the United States and his life in Arkansas, Laz said there were a lot of things to overcome. “I do like a challenge,” he said. “I’m one of those people who like to figure things out.”

Today, he is living the life he envisioned when he set out for the U.S. on a raft with only the clothes on his back. “I was poor in Cuba. Now, I’m not rich by any means but I have a beautiful family and a wife who loves me and supports me. I have most of my needs met,” he said. “I love Conway.  I’ve been here 20 years now. I love my job and I love working for the Conway Police Department.

It has been a tremendous privilege to have individuals share and trust their stories with me and 501 LIFE readers over the last 10 years. They’ve shared their happiest and saddest moments, their hard-fought accomplishments and their heart-wrenching losses.

It is an absolute honor and I thank them for the opportunity. 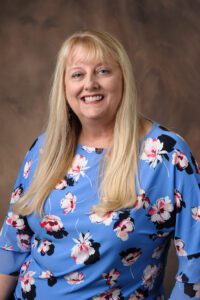 A native of New Iberia, La., Sonja is a graduate of Hartman High School (Johnson County) and Ouachita Baptist University in Arkadelphia. Sonja is active in the community, serving on various boards and committees including the Conway Regional Women’s Council, the UCA Reynolds Community Council and the Faulkner County Council on Aging. A daughter of Mary and Stan Clinesmith of Conway, she has three younger sisters, Tricia, Stacey and Lori. Sonja and her husband, Tom, have four grown children – James, Emily, Laura and Joe. The family attends Grace United Methodist Church in Conway.