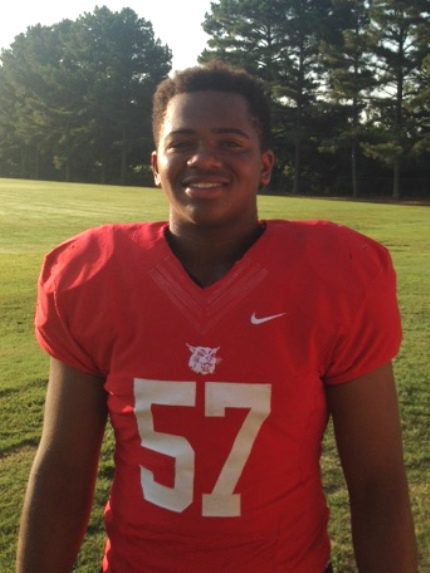 
With last week’s 41-27 victory over Bald Knob, Harding Academy not only clinched its seventh-consecutive 2-3A conference title, but also won its 52nd-consecutive conference game — a feat that cannot be accomplished without great leadership. For the Wildcats, that leadership comes in the form of senior lineman Miles Clements.


“Miles is a great competitor, but also probably the quietest competitor that I’ve ever coached,” said head coach Roddy Mote. “I don’t think I’ve ever heard Miles say a word on the field. I’ve witnessed him make a lot of plays though. I’ve also seen him give many high fives, chest bumps, embrace teammates and help opponents off the ground. He makes a lot of ‘noise’ in a different way. He makes plays and provides the opportunity for others to make plays, too. He gives you results.”


Clements was selected to this year’s 501 Football Team — 27 players representing all 11 counties of the 501. The team boasts the best the 501 has to offer both on and off the field. Clements was nominated by Mote.


“Miles just plays,” Mote wrote in his nomination. “He’s extremely coachable. He has a special knack for doing things correctly and transferring that over into competition. This makes for an extremely productive player. When you consistently get the best effort from a player in practice and games, the expectations have been met. Miles is going to give that to you. He’s a joy to coach.”


Clements picked up football in fifth grade when he and his family moved to Arkansas.


“I wanted to compete and try to hit somebody,” Clements said. “When I watched football on television, I would watch Ray Lewis. He hits hard and makes plays. I love his passion and athleticism.”


As the Class 3A playoffs dawn for the title-hungry Wildcats, Harding Academy faces the traditionally powerful Booneville Bearcats. Clements believes that his team’s key to success will be both stamina and physicality.


“Booneville is a team that likes to control the clock and time of possession,” Clements said. “We’ve been studying their film for days now. We want to get the ball as quickly as possible and sustain long drives. In order to win, we will need to be physical on every down and make plays when we have the opportunity. We cannot sleep on any play.”


As he prepares to enter the playoffs with his team for the final time, the senior reflects on a season that has been filled with ups and downs.


“Against Heber Springs, I was injured on our first offensive series,” Clements said. “I was blocking and driving someone back and I felt another player fall onto my leg. I felt a big pop and that was it.”


Luckily for Clements, the diagnosis — a sprained MCL — meant that the senior had a second chance at finishing his high school career with his teammates.


“My injury could have been much worse,” Clements said. “I was completely out for one game and played offense only for two or three games. During that time, I saw a lot of younger guys step up and make a lot of plays. I think it brought us a lot closer as a team. I’m back to playing on both sides of the football now. I’d say that I’m at about 90 percent today.”


In his final games as a Wildcat, Clements has been playing with additional inspiration — his ailing mother.


“My mom has multiple sclerosis,” Clements said. “My whole football career, I’ve been trying to play my best for her and show her how well I can play. She comes and watches me play, and I try to make her proud of me.”


“If you really know Miles, you see a young man who doesn’t allow circumstances or challenges to keep him from enjoying the moment and a positive influence on others,” Mote said.


Off the field, Clements contributes to Harding Academy basketball and is involved in Beta Club and FCCLA. In his free time, the senior can be found shooting the breeze on the golf course and singing to the elderly at local nursing homes.


“I’m very involved with the choir at Harding Academy and at my church, Searcy Seventh Day Adventist,” Clements said. “This year we’re planning to go on a chorus tour to Colorado; singing to churches and schools across the way.”


“Miles loves people,” Mote said. “He sees value in people. He strives to be friends with everyone. He doesn’t see the barriers that most people recognize. People love to be around him. He’s always got a grin on his face.”


“I love Searcy,” Clements said. “I enjoy how happy and friendly the people are here. I’ve lived in Ohio and California, and in those places, it’s not like it is here.”