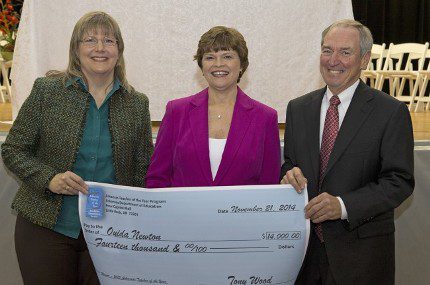 Ouida Newton, a math teacher at Poyen High School, was named the 2015 Arkansas Teacher of the Year at a surprise notification event in Poyen (Grant County).

"Arkansas has some of the best teachers in the country, so it is extremely difficult to select just one teacher to receive this honor," said Arkansas Department of Education Commissioner Tony Wood. "Ms. Newton has a strong teaching history and outstanding accomplishments, making her a deserving teacher for this recognition."


Newton currently teaches math for grades seven through 12 at the high school. During her 34-year career, she has taught math, Algebra I and II, sixth-grade science, pre-algebra, geometry, pre-calculus, calculus, trigonometry, transition to college math, physics and Algebra A & B.


During her career, Newton has served as a library media specialist, math coach, curriculum supervisor, class sponsor, senior Beta Club sponsor and Teachers of Tomorrow supervisor. She currently teaches algebra, trigonometry and introduction to computers at the College of the Ouachitas in Malvern. She previously taught at the Searcy School District and Pulaski County Special School District.


Newton initially received a $1,000 award from the Walton Family Foundation, a long-time supporter of the award, when she was named one of 15 regional finalists. The foundation presented her with an additional $14,000 award.


In addition, SMART Technologies of Canada awarded her the 2015 Teaching Excellence Award, which includes technology products for the classroom and training.


The ATOY program is part of the National Teacher of the Year program, which began in 1952. The program honors teachers for their excellence in teaching.


Arkansas law provides for the Arkansas Teacher of the Year to take a year of paid administrative leave for professional development purposes and to serve in an advisory position as a non-voting member of the Arkansas State Board of Education.


For more information about the program, visit http://www.arkansased.org/divisions/communications/teacher-of-the-year.