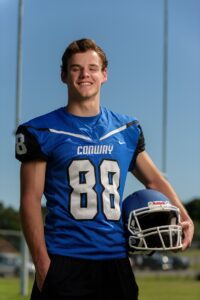 Under first-year head coach Keith Fimple, the Conway Wampus Cats have put together a solid 8-2 regular season, earning the No. 3 seed out of the 7A Central. Whether it’s been focusing on blocking for the running backs on rainy nights or hauling in a touchdown in overtime, Will McKenna has been a catalyst in Conway’s success. With the playoffs upon us, the table is set for another deep Conway run.

“This team can go as far as it desires,” McKenna said. “If we all believe in each other and our coaches, then I think we have what it takes to contend for a title. For us, we’ve had our eyes on a state title game since we lost in the semifinals last year. I want our team to succeed on and off the field and to always be there for each other as teammates. Having each other’s backs is always important to Conway football on and off the field.”

After playing on Black Friday in 2017, the path to another 7A semifinals appearance has the feeling of déjà vu. Just like last year, Conway opens the playoffs hosting Rogers.

“The game plan this week is to take out some of our anger from the Bryant loss last week and enforce our will early,” McKenna said. “We want to get better every single week, and the emphasis this week is not on Rogers, but on us as a team.”

And just like last year, a win over Rogers would send the Wampus Cats to Bentonville West, with North Little Rock likely looming again on Black Friday. Conway fans may feel like they’ve seen this movie before. But how the Wampus Cats got here is a bit different than last year. It’s been a season of amazing comeback wins, and it all started with El Dorado in Week 0.

“It was a game of ups and downs, but it came down to us being down by seven in the first overtime, and we were on fourth and 11,” McKenna said. “[Conway quarterback] JoVoni [Johnson] threw a goalie fade route to me, and I scored to tie up the game. JoVoni went on the score the game winner in double overtime.”

In their second game, Conway took fans on another emotional ride.

“The highlight of our season so far would have to be coming back from 21-3 in the second half against Bentonville to win 24-21 at home,” McKenna said. “Bentonville is a very talented team, and beating them always feels good, especially in that way.”

Two other times this season (at Cabot in Week 6 and against Northside in Week 7), the Cats overcame a 14-point deficit in the second half to win.

McKenna, a senior receiver for Conway, was selected to this year’s 501 Football Team — 28 players representing all 11 counties of the 501. The team, sponsored by Conway Ortho and Sports Medicine Center, Conway Regional Health System and First Security Bank, boasts the best the 501 has to offer both on and off the field. McKenna was nominated by his former head coach, Conway Athletic Director Clint Ashcraft. 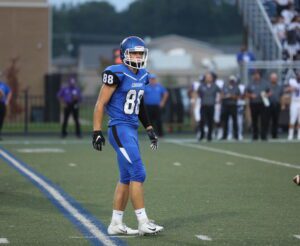 “Will brings a positive attitude to the team,” Ashcraft wrote in his nomination. “He has great hands, works hard all the time and has a strong desire to be successful. He keeps his mouth shut and just goes to work every game and practice, and he’s also one of the first to congratulate teammates when they are having success.

“He’s a great young man — one of those guys that when he walks in the room, other people smile.”

In the regular season, McKenna was Conway’s second leading receiver with 22 catches for 392 yards and four touchdowns. He’s also helped block on the edge for an offense that has rushed for more than 2,500 yards.

“There is no single key that has contributed to our offense’s success this year,” McKenna said. “It starts with our offensive coordinator, Brian Raney, putting in countless hours every week to ensure that we are always in the best plays possible each week for every team. All of our position coaches — Coach Lampe, Ross and Rodgers — also put in these hours each week to make sure we are prepared to be as successful as possible.

“I wanted to prove as many people wrong as possible after my knee injury that cut my season short last year. As long as I’m helping others get better every day, then I feel like I’ve helped our team for good.”

Off the field, McKenna is involved in Student Council, Fellowship of Christian Athletes and National Honor Society at Conway High. After graduation in May, he plans to attend the University of Central Arkansas and major in exercise science. “I’m thinking about being a physical therapist or a trainer.”

McKenna and the Wampus Cats (8-2) play host to Rogers in the first round of the 7A playoffs at 7 p.m. Friday.