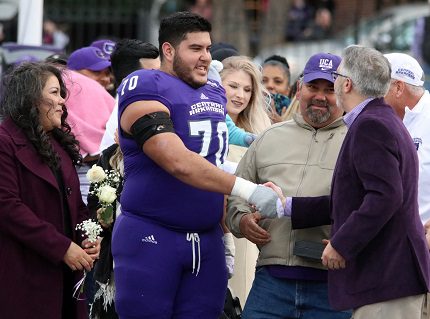 
Garcia, a graduate student from Morrilton, had a 3.43 grade-point average while earning his MBA in insurance and risk management.


Graves, who transferred to UCA from Mississippi Gulf Coast Community College, was a two-year starter at linebacker for the Bears. Graves finished his two-year career at UCA with 119 total tackles, including 9.5 tackles for loss, two pass breakups and a fumble recovery. He was UCA’s No. 3 tackler in 2017 when the Bears finished 10-2 overall, won the Southland Conference title with a perfect 9-0 record and won a Division-I school record 10 consecutive games. Graves had 70 tackles and played on a defense that ranked second in the league in scoring defense, rushing defense and total defense.


Cook and Garcia helped the Bears’ offense average 37.6 points and 468.2 yards per game last fall – both second in the SLC – while winning 10 straight games. They teamed up to help lead a UCA offense that rushed for 207.8 yards per game and passed for 260.4. UCA’s offensive line has allowed only 11 sacks in 12 games.


Ponder was third in the SLC in punting with a 40.8 average in his second year as a starter after transferring from Jones County Junior College.


The SLC All-Academic Teams are voted on by a head coach, sports information director and academic/compliance staff member from each school. Voting for one’s own athletes is not permitted. To be eligible for all-academic distinction, an athlete must hold a minimum 3.00 cumulative GPA through the semester prior to the sport’s championship, completed at least one full academic year at the nominating school prior to the current season, and participated in at least 50 percent of the team’s competitions during the most recently completed season.