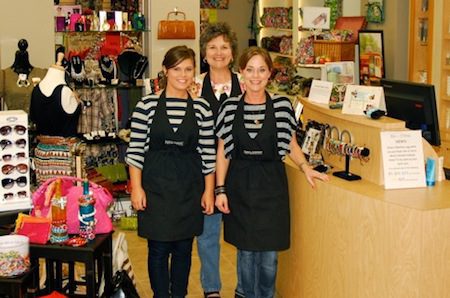 
It has been just a little over a year since Brandi Stobaugh Cooper squeezed herself into a tight little ball to try to avoid being hit by bricks and beams as the building where she had had her dream business collapsed around her.

Brandi and her staff had been hearing noises for several days at the Merle Norman store located on Broadway in Downtown Morrilton. At first she thought it was a mouse that had gotten into the walls of the very old building.


Brandi and Kim Resecker, an employee at Merle Norman, were cleaning out shelves in the back and had filled quite a few trash bags. Kim had just opened a side door to take them out when a customer came in. Kim went outside, and Brandi went to wait on her customer. The building groaned again. Brandi explained she had been hearing noises and was going to call her landlord at the end of the day. Her customer looked at her and said,


As she turned to go get her cell phone, the ceiling collapsed where she had been standing.


“I knew the whole building was coming down!” said Brandi. Her cousin Damien Paladino, an accountant, had been working on her books at the store that morning and simply grabbed Brandi and ran for the side door.


“We could see light coming in from that door,” Brandi said, but the door had slammed shut. There was no escape. That’s when Brandi made herself small, and her first cousin bent over to shield her from falling debris. Her customer had also made it to the side door. Then the dust came.


“I thought we were going to suffocate,” Brandi said.


After the dust settled, the three started to yell to let people know they were in the building. The three, along with several other people in the adjacent building that fell, were rescued and transported to the hospital.


The cause of the collapse of the two buildings has yet to be determined.


Even though Brandi and her cousin were not seriously injured, the customer had to stay in the hospital. Brandi also knew every piece of merchandise was lost.


“I went out and drove around town looking at empty buildings,” Brandi said of the day after the collapse. “My first thought was to get my business back up and running.”


Within a week she had a new business location at an old gas station that had been turned into office space. She worked closely with Sandra Haeberle, executive and vice president of sales and communications for Merle Norman. She had a scheduled appointment to talk with Brandi the day after the building fell.


Brandi said Sandra and the company’s regional business consultant worked with her tirelessly to get the new building’s interior redesigned and to purchase new merchandise.  By July 11, Brandi opened her doors once again even though the new cash register had not arrived.


By October, the building was finished and a grand re-opening took place. “I want to thank all of my customers for sticking with me.”


Brandi said she felt lucky that day in May because all she lost was merchandise. “This has taught me to take more time for my family. I want to make my business a success, but my family is my priority.”