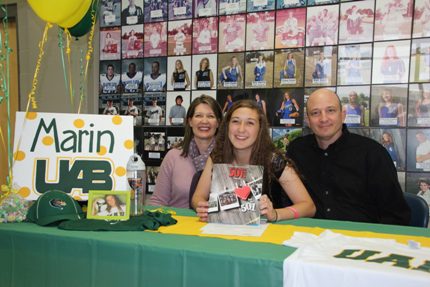 Surrounded by family, friends and teammates, the ceremony was held at Buzz Bolding Arena on the high school campus.


“When I asked Marin who helped her the most in her early years, she quickly answered her parents,” said high school coach Kevin DeStefano. “Todd (dad) bought her skill videos, learned the moves himself so he could better instruct her and tried to find her the best coaches in the area. Her mother, Michelle, is her No. 1 supporter, driving her all over the U.S. for games, traveling with her to tournaments and always quick to remind Marin of how proud she is of her.


Carter has two sisters, Alex and Abby, whom she considers best friends. Alex also played at Conway High and is a member of the University of Kentucky soccer team.


“Marin already has a soccer resume that would make most players her age jealous,” the high school coach said. “She’s played on the ’94 Arkansas Rush girls and boys team, played with the ’97 boys Rush team, and played with the ’97 Texas and Virginia Rush ECNL teams, a national club team and is one of if not the highest level for girls soccer in the U.S. at this age.”


As a freshmen, Marin helped lead the team to the state championship game and made first team all-state, which is an amazing honor for any athlete, much less a freshman.

“I have been lucky enough to work with Marin for nearly five years now, both with Arkansas Rush and at Conway High School. Marin was already an extremely talented player when I began working with her, and she has continued to develop into one of the top prospects this state has produced. She has incredible vision, one of the best first touches I’ve ever seen, is deceivingly fast and agile, is technically incredibly talented, is a student of the game and one of the best players I have ever gotten the privilege to watch, coach and play with.”


The coach described Marin as a “fierce competitor” and his choice as team captain for this year’s Conway girls squad.