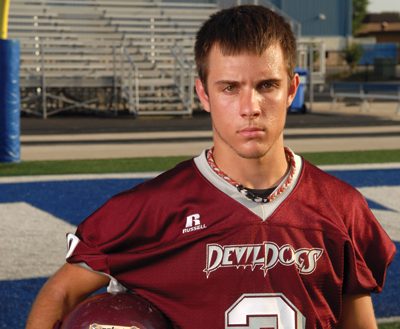 The Devil Dogs have looked sharp to start the season (as of press time, Morrilton was 2-0 with big wins over Russellville, 42-14, and Dardanelle, 48-13), and 501 Football Team member Forrest Been has been a big part of their success.

“Forrest is a great teammate with high character and a good attitude,” said Cody McNabb, second-year head coach for the Devil Dogs.

Been, a senior, has a hand (and foot) in all three phases of the game for Morrilton – he plays on offense at wide receiver, on special teams at punter and on defense at cornerback.

Been was one of 17 players selected for the inaugural 501 Football Team – a team made up of at least one player from each county in the 501. The players were nominated by their respective coaches based on their character and contributions on and off the field.

Been is a fine representative of what this team stands for. His No. 1 personal goal this season is not to be named to the all-conference or all-state team – rather it’s to be a better teammate.

“I want to be someone my teammates can count on,” Been said. “I want my classmates and the underclassmen to be able to come to me if they have questions about anything – whether it’s how to run a specific route or it’s something about life in general.

“I just want to be able to help them out.”

The Devil Dogs finished 3-7 last fall in McNabb’s first year at the helm. Morrilton closed out the year with two 5A-West wins over Huntsville and Siloam Springs.

“We left last season on a good note,” Been said. “This summer everyone worked hard, and we just seem to be more of a team – like a brotherhood or a family.

“We ran the Spread before Coach McNabb came, but it’s more balanced now.”

While the Devil Dogs have gotten off to a good start, the true test will come in conference against the likes of Alma, Greenwood and Greenbrier – teams Morrilton plays consecutively to start off conference play. Greenwood is the defending 5A state champ.

“I’m looking forward to playing Alma, but the main one would be Greenwood,” Been said. “We just have to take it one game at a time and work hard in practice. Like coach says, something bad will always happen during a game, but it’s all about how we handle it – it’s about how we respond to adversity.”

Been is an active member of his youth group at First Baptist Church in Morrilton. According to McNabb, Been’s personality and work ethic are part of what make him a valuable player for Devil Dog football.

“He works hard and plays hard, and he constantly encourages his teammates,” McNabb said. “He’s a good example, and he has a good personality and gets along with everyone.”

And on top of that, he’s a good football player, too.

“He catches the ball well,” McNabb said. “He’s a smart football player who runs good routes. We expect him to be a good leader this year and a positive influence on our team.”

(Read more about the other members of the inaugural 501 Football Team in future issues of 501 LIFE and 501 LIFE Extra, our weekly e-newsletter. Sign up for the newsletter today at here.)