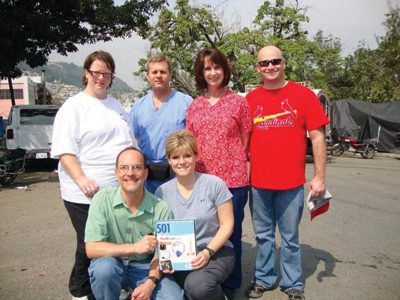 So on Feb. 20, a team of six from Second Baptist Church left Conway to travel to Haiti’s capital city on a medical mission trip. On March 8, a second team of eight dispatched to the island.

There was very little time to prepare for the first team, which consisted of pharmacist Dwight Davis, nurses Dan West and Kristen Schwulzt, radiology technician Teri Murphy, certified ophthalmic technician Pam Sims and pastor Dane Abels. But we made quick work of getting the trip organized and contacting those already on the ground and another team from Rogers that was going to meet up with us when we arrived.

In the combined trips, each team provided much-needed medical assistance to more than 1,000 patients, seeing and treating everything from common colds to more serious health issues such as diabetes and high blood pressure.

Most of the life-threatening injuries that had occurred right after the earthquake had already been taken care of in the first few days and and weeks after the quake, but the need for ongoing medical treatment persisted because of the massive numbers of sick who had gone untreated for their ongoing medical programs since the earthquake. Some of the facilities to treat these patients no longer existed, and even before the earthquake, many of the ill had not been seen by a doctor or nurse.

Our second day of the medical clinic proved to be the most difficult, but also the most rewarding.  We traveled to a tent city down by the river, a two-hour trip.  All of the inhabitants of this tent city were displaced by the earthquake and migrated to the river, where they were living in deplorable conditions. What amazed me were the children. Children are the same all over the world: Carefree, happy, smiling, precious. You could not help but fall in love with them. They lined up in the searing heat of the Haitian sun to have an opportunity to see the doctor or the nurse. The needs were the same as the previous day, with a few exceptions, but that day we saw more than 250 by the time night fell.

That would not only be a day of medical ministry  — there was also an opportunity for five members from the two teams to drive deep into the heart of inner city Port-au-Prince to one of the largest tent cities, which an estimated 45,000 people called home. We went there at the invitation of a local missionary, Joel Trimble, who has lived in Haiti for 35 years.  He was going to be showing an evangelistic film that evening, and we were going along to help him set up and to meet some of the local people.

The only word to describe the scene would be unbelievable. More than 5,000 people made their way to the entrance of the park and quietly, almost reverently, watched as the film played. After the film, was shown Joel Trimble shared the Gospel, and several hundred people prayed to receive Christ. It was without a doubt the most moving experience we had ever been a part of.

For us, it was all about meeting needs both physical and spiritual. That was why we went and that is why we would go again. The needs of these people are great. Their needs will not be quickly resolved. It will take many years and many people to get them through this. We are prayerfully considering our next step to return.

For all of us, we would go again.