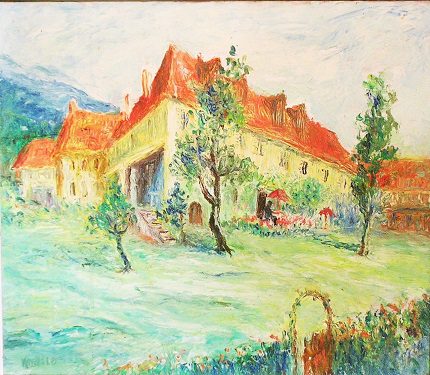 Some of the work of the late Conway artist Gene Hatfield is on display at the Arkansas Governor’s Mansion.


“The Hatfield Family is honored beyond words to have been invited to exhibit some of Gene’s work as part of the Arkansas Governor’s Mansion Artist in Residence Program,” said his daughter, Mathilda. “Thirty-five of Dad’s two-dimensional works in acrylic, oil, pastel, mixed media and watercolor are on exhibit through March.”


Hatfield’s 40-year career in education at the University of Central Arkansas spanned both the art and theatre departments. He taught drawing, painting, sculpture, crafts, design, art history, art appreciation and stagecraft until he retired in 1985. He was named Professor Emeritus by UCA in 1995.


Among his many accomplishments, he received top prize in 1967 and 1969 in La Palette Française – Grand Prix de Peinture de la Côte d’Opale, Le Touquet, France; and his sculptures and paintings were featured in the Arkansas Arts Center Annual Delta Exhibitions. Several of his sculptures are registered with the Smithsonian Institution’s Save Outdoor Sculpture program, continually adding value to the art community.


He received the Arkansas Arts Council 2010 Governor’s Award for Lifetime Achievement, and in 2013, was featured by AETN in its documentary series “Arkansas Men and Women of Distinction.”


Public viewing of the Mansion art exhibit is available by reservation only at 10 a.m. on Tuesday, Feb. 6; Friday, Feb. 16; and Tuesday, March 13.