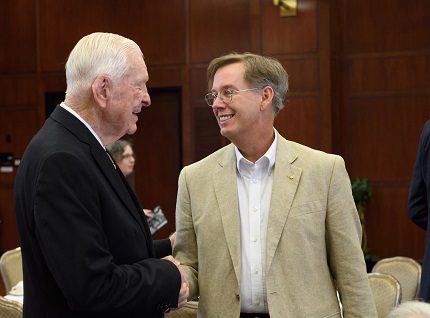 Harding University recently named Professor Kevin Klein as the first recipient of the Clifton L. Ganus Jr. Distinguished Chair of History and Political Science. The endowed chair was established in April to honor Ganus, chancellor emeritus of the University, who had turned 95.


“I am obviously flattered by the award and proud to be associated with the Ganus name,” said Klein.


A 1986 Harding graduate with a bachelor’s degree in history, Klein went on to complete his master’s and doctoral degrees in history from Florida State University. He began teaching at the University in 1994 and has taught courses in world history, American history and European history. Klein was named chairman for the department of history and political science in 2003, a position which he held for 13 years. He was awarded the University’s Teacher Achievement award in 2002 and 2010 and named an Alpha Chi Faculty Scholar in 2012.


In his role as distinguished chair, Klein plans to implement more opportunities for educational excursions, produce a university-level text in American history and publish a history of Harding for the 100th anniversary of its founding. He would also like to establish an educational conference for the development of scholarship and teaching in history, political science and public administration with the objective of promoting the mission objectives of the University in the greater academic community.