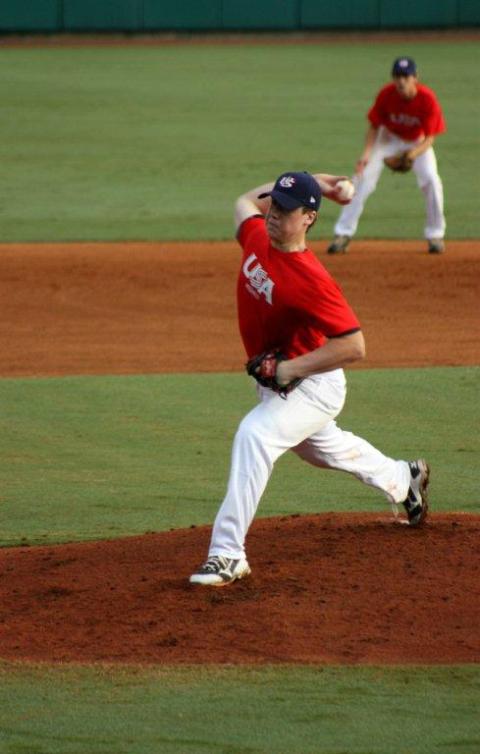 
Greenbrier’s Paxton Wallace recently made USA Baseball’s 15U National Team Trials. Wallace was the only player from Arkansas to make it past the 2013 National Team Identification Series (NTIS) in any age division.

The initial tryout process began for Arkansans at one of three places: University of Arkansas, University of Central Arkansas or Arkansas State University. Players tried out at one of these locations in hopes of becoming one of 18 players selected to represent the state in St. Louis to play games in the Midwest NTIS against the states of Missouri, Oklahoma, Kansas and Nebraska.


“The tryout consisted of individual skills: speed and agility, batting practice and position skills. Paxton signed up as a corner infielder and did his tryout as a third baseman. They also played three games during the course of the weekend. The Midwest team played the Stars, Mid-Atlantic and North Atlantic teams. He was the opening pitcher for the event.”


The NTIS concluded with a total of 93 games played, featuring 1,082 players from five different groups of players and representing 16 regions across the country, according to usabaseball.com.


Paxton was one of 51 players selected out of the total pool of 1,082 players.


“It feels amazing to be the only player selected from the Midwest for my age group,” Paxton said. “I am very proud to represent Arkansas and the Midwest on the National Team. I love everything about the game; I even love the practices and the workouts. Baseball is my life, and I feel blessed that God has given me the ability to play this game.”


“Paxton has made it into an elite group of players, and they will be traveling back to Cary, N.C., in July for the 15U National Team Trials,” Christy said. “They will be split up into two teams and will work out and compete against each other for a week to 10 days; then they will select the [team] that they will take on the road in August to the World Championship in Mexico.”


Competitive baseball on a national stage is nothing new to Paxton, who has played on all-star and travel teams before the USA Baseball tryouts.


“The past two seasons, Paxton has played with Rawlings Prospects under Coach Andy Menard,” Christy said. “Paxton’s success is due to the hard work and dedication of his team and coaches, especially Coach Menard. They won the 2013 National Championship in Orlando where Paxton was named to the All Star team and played in the All Star Game on ESPN 3. They also traveled to Fort Myers for Perfect Game USA where Paxton was named to the All Tournament Team for pitching and the All Tournament Team for hitting.”


But making it to the next step in the USA Baseball tryouts has some added special meaning for Paxton.


“The USA events have been the best experience of my life,” he said. “I have made some great friends from around the country and have been coached by the best. USA Baseball is a first class organization, and I am proud to be a part of it. I am honored to wear USA across my chest and represent my country.”