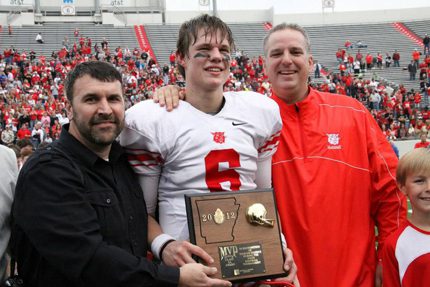 Winning a state championship is hard. Just ask anyone who has ever played high school athletics. For many, it’s just a dream. For Will Francis and the Harding Academy Wildcats, it is not only a reality, but a story for the ages.

On a cold December night in 2012, trailing by three points with just 1:11 left in the game and 73 yards to go, the Wildcats knew there wasn’t much time left to make a comeback against Glen Rose. Francis, the senior quarterback, remembers standing in the huddle with coach Roddy Mote.

“Coach Mote didn’t make a big deal out of the situation,” Francis said. “He told us that it could be done and to go out there and do it. We knew it was possible, but I don’t know how many people thought we could actually pull it off.”

Francis moved the football downfield quickly, hitting six straight receivers to bring the Wildcats within field goal range. Halfway through the drive, however, Francis and the Wildcats lost key receiver Kohl Blickenstaff to a shoulder injury. With one of his top offensive weapons knocked out of the game with just 12 seconds remaining, Francis connected with a new target — Caleb Spears — who would break four tackles on his way to the end zone, a 20-yard scamper for his first touchdown reception of his career.

And with that catch, the Wildcats capped their perfect season at 14-0 with the school’s first state championship in 11 seasons. Francis, a member of the 501 Football Team for 2012, was named the game’s MVP, finishing 35-of-48 passing for 499 yards, four touchdowns and one interception.

“Caleb wasn’t supposed to catch that pass,” Francis said. “He had maybe four or five catches all year, but he broke four tackles and made a great play. He came up big when we needed him the most.

“One thing we tried to do throughout the year was speed up our offense and have fast-paced play to catch our opponents off guard. Winning the state championship has always been a dream and a goal of mine. You never know if you’ll win another.”

Little did Francis know, he would find himself holding another state championship trophy for Harding Academy just months later.

On March 8, Harding Academy found itself facing another state title opportunity, this time in basketball against Little Rock’s Episcopal Collegiate. Leading by nine points at halftime, Harding Academy held off a strong Episcopal run late in the game, which cut the lead to one point.

“We knew they would put quite a bit of pressure on us and try to make us turn the ball over,” Francis said. “One thing we did a really good job of was handling the ball and handling their pressure defense and doing what we did throughout the whole game. We made plays like we had to and made free throws when we had to at the end.”

Harding Academy held on for a 45-40 victory, notching another title for the school. Once again, Francis was named the game’s MVP. The forward achieved 17 points, 8 rebounds and five assists in the win. As the team celebrated together on the floor, Francis celebrated with his father, head coach Brad Francis.

“That win will always be the most special to me,” Francis said. “Being able to win the championship with my dad is something I’ll never forget. It’s something he’s always dreamed of having. He had never won one. It was neat to experience that game, that run and that season with him as my coach.”

With two championships in hand, Harding Academy’s successful year was far from finished. On May 17, the Wildcats would find themselves in another state title game — this time on the baseball field.

Facing red-hot Fordyce, the Wildcats were no stranger to tough competition.

“Throughout the year, we played a very tough non-conference schedule,” Francis said. “We beat some very good teams and lost to some very good teams. Although we entered the playoffs as the four seed, we told ourselves that the seeds didn’t matter, and we got into the mindset that we could play with anyone in the state because we had.”

Harding Academy broke the game open early, scoring five runs in each of the first two frames, stea
ling the momentum away from the Redbugs.

“We went ahead 5-0 in the first inning, and I think that really set the tone for us,” Francis said. “We scored five more runs in the second inning, and we really shut them down defensively. Up 10-0, we had the feeling that we were about to do something great for our school.”

The Wildcats would chip in four more runs on their way to a 14-3 victory. Once again, the Wildcats tasted championship victory, winning the school’s second state championship in baseball. With the win, Harding Academy clinched the proverbial “triple crown” of high school sports, winning state titles in football, basketball and baseball.

For Francis, it’s been dreamlike.

“After we won the baseball title, I told my dad that I hope I don’t wake up tomorrow morning and it was all a dream,” Francis said. “The people I got to experience these championships with — the coaches, the players, the school — putting it all together made it very special for me, and it’s something I will never forget.”

Most athletes are only able to focus on one or two sports while balancing schoolwork. For Francis, his athletic successes have not come without their challenges.

“It’s a grind,” Francis said. “You never get to have a break because there’s never a break. One thing that made it easy on me was the way our coaches handled each sport. Each coach understood time management and worked with each other to make it easier to be able to play all three sports without having any other problems.”

Francis graduated from Harding Academy on May 17 with a 3.9 GPA. Today, he looks forward to the fall, when he will continue his athletic and academic career with Harding University. Francis signed with the Bisons to play basketball on Nov. 15, 2012.

“I’m going to go across the street and play basketball for Harding University,” Francis said. “I felt that was where I needed to be, and that’s where God told me to continue my academic career.”

Though his days as a student at Harding Academy have come to a close, Francis’ achievements and accomplishments will not be soon forgotten in the halls of the Searcy school.

“Relationships are better than championships,” Francis said. “Throughout these sports, I’ve made some great friends, and they will always by my friends. I hope that I am remembered as an example to younger kids of how to play these games and how to be a leader and an encourager.

“I hope to tell and show people that there’s something even greater than these championships. I wouldn’t want it any other way.”