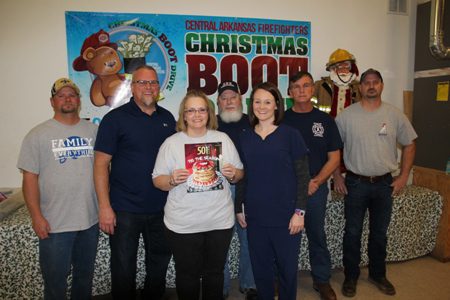 
The 18th annual Central Arkansas Firefighters Christmas Boot Drive generated just over $44,000 which was used to purchase gifts and food boxes to make the holiday brighter for the less fortunate in Faulkner County.


Firefighters and volunteers held boots to collect donations at several locations in Conway over several Saturdays after Thanksgiving. In addition, 65 boots were also been placed in businesses throughout Faulkner County, with $9,300 collected.


The total amount collected was down from last year, with rainy weather a factor the first weekend of the drive.


Still, Capps and others involved in Fill the Boot expressed their thanks to the community. “We are so blessed and appreciate all the citizens of Faulkner County,” Capps said. “We could not have made any of this happen without their help. It’s one of the best places to live in Arkansas.”


This year, organizers dedicated their campaign to the late Conway firefighter Wayne Hartness. Representatives of his family, firefighters and other volunteers were on hand Dec. 15 for a wrapping party.