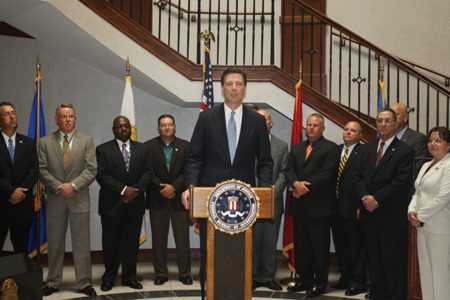 
FBI Director James B. Comey stopped in the 501 recently on his tour of the agency’s field offices, meeting with law enforcement officials from around the state, including Conway Police Chief A.J. Gary.

Comey, who was appointed Sept. 4, 2013, to a 10-year term, said during a press conference at the Little Rock Field Office that those conversations confirmed that drug-related violent crime, including robberies, burglaries, murders and assaults, remained the major focus of Arkansas law enforcement.


“There is a significant methamphetamine problem in Arkansas, and if I can look into the future, I predict that Arkansas will see a wave of heroin,” Comey said. “(Dealers in) Mexico (are) pushing a highly pure form of cheap heroin that has led to a wave of overdoses.”


Other crimes on the FBI’s radar include public corruption, an example of which is the high-profile Martha Shoffner case, in which the former Arkansas treasurer resigned after being charged with corruption. She was convicted on 14 bribery and extortion charges in March.


While Comey didn’t speak specifically about the Shoffner case, citing an upcoming trial in which she faces 10 counts of mail fraud by misspending campaign funds on personal items, he did speak generally about the crime.


“Public corruption in general remains at the top of our list, and it’s something we do well. Unfortunately, people and power is often a bad mix because of human nature,” he said, adding that law enforcement makes high-profile examples and later has to come in and repeat the process after the next round of public officials falls prey to temptation.


“It’s work we have to do aggressively,” he said. “Anybody who’s not experiencing a public corruption case in your community will someday.”


Since 9/11, he said, the agency has made counterterrorism its No. 1 responsibility. It is focused on two dimensions. One is the homegrown, violent extremists “who are not directed by but inspired by al-Qaeda, who can work themselves into a frenzy in their basement and take out those frustrations” anywhere.


“It’s not a New York or Washington thing; it’s an everywhere thing,” Comey said. “It is the home-grown violent terrorists that remain a focus of this office.”


The second dimension is the “breeding ground for terrorists” in some parts of Syria over the last few years that is now spreading into other places such as Iraq. Such terrorists get trained in the Middle East and then return to their homes in Western Europe or North America to put their lessons into action.


“We are determined not to allow a repeat of history,” Comey said. “With the diaspora that will come at some point, we have a list of worries.”


He also spoke about Operation Cross Country, the FBI’s ongoing effort targeting child sex trafficking. Operation Cross Country VIII had been carried out the previous week in 106 cities involving 54 of the agency’s field divisions across the United States, resulting in the arrest of 281 pimps and rescue of 168 children.


Comey reiterated that the agency would “come down hard” on those pimps, whom he described as “people who are crushing the souls of children.”


“We are sending a message to them — we’re going to hammer you,” he said.


Comey, a New York native, built his reputation as a U.S. attorney in New York, where he was the lead prosecutor in United States v. John Gambino, et al and prosecuted those involved in the 1996 terrorist attack on the U.S. military’s Khobar Towers in Khobar, Saudi Arabia. He is also a former deputy attorney general at the U.S. Department of Justice.


Deb Green, public affairs specialist for the Little Rock Field Office, said Comey’s goal was to visit all 56 field offices by the end of 2014. Little Rock’s is the only one in Arkansas.