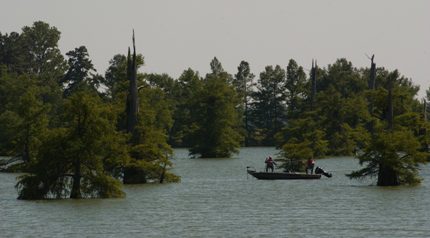 Arkansas Department of Parks and Tourism

Though fishing in Arkansas is available year-round, fall is a beautiful time to cast a line and enjoy the favorable temperatures and colorful fall foliage of the season. The Ouachita River has long been a lure to anglers due to the stream’s prime fishing waters. The river, which runs around 600 miles, starts as a mountain creek flowing off Rich Mountain in Polk County and over the course of its epic journey to north-central Louisiana, winds through a diverse landscape that includes everything from scenic bluffs in its upper reaches to swamp bottoms filled with cypress trees as one approaches the lower sections.

Chris Summerville of Ouachita Outdoor Outfitters in Hot Springs has fished the river off and on for the past 15 years. When asked about his favorite spot, he was hard pressed to pick just one. “The whole river is good,” he said. “It just depends on what people want to fish. You can catch smallmouth bass just about anywhere. You’ve got trout below the dams.”

“It is a pretty big river, bigger than most other streams here in the Ouachitas,” he said. “It is pretty wide, has got a lot of grassy shoals, a lot of bedrock, really good habitat for smallmouth and largemouth bass, spotted bass, catfish and sunfish.”

Summerville said two keys to keep in mind are having an understanding of the water levels and the way the dams on the river affect these levels. “The fish are going to do different things based on what the water is doing,” he said.

Jason Olive, district fisheries supervisor for the Arkansas Game and Fish Commission, mostly fishes the segment of the river that goes from Malvern to the Louisiana state line.

Within that section, he said there are two different habitats. He refers to the stretch from Remmel Dam all the way down to Camden as the middle Ouachita River. “It’s a larger riffle pool type stream than the upper Ouachita, above Lake Ouachita,” he said. “But when the water is down you still can’t motor very far with a traditional outboard motor. You either have to have a jet-foot outboard or float it in a canoe or kayak.” He said this stretch is good fishing in the fall for bass including a few smallmouth and walleye.

Olive said during the fall, this section is more difficult to navigate because of the shallow shoals, especially when the dams (DeGray and Remmel) are not generating electricity.

He said the middle Ouachita resembles more of an upland type stream than a bottomland river. “That water is so clear; it’s really pretty.  You can see the gravel and rock bottom shoals, and you feel like you are in more of mountainous area than what you are.”

Though beautiful, the clear water can also lead to fish getting spooked easier if you try to cast a line right on top of them. “The water is so clear typically that you just have to stay back and make long casts if you want to be successful with bass fishing there,” he said.

As far as where the bass are, Olive said they hang out in the same type of places year-round: slack water and eddies just outside the current, around some sort of structure, rock or wooded debris. In the dead of summer and winter they may go down to the depths of deep pools too. “But for most of the year they are up hanging around the logs and rocks just outside the current in a little current break feeding,” he said.

On the lower section (downstream of Camden to Felsenthal reservoir near Crossett) Olive said a key tip to keep in mind is that as it gets cooler and closer to the end of November, the water temperatures will drop, causing shade to start moving out of the river and into some of the backwaters and up into the creeks. “The bass will follow them and you can catch a lot of them going up into the back of some of the sloughs and creeks,” he said. “Before that happens you can really catch a lot around the mouth of those areas. For the crappie you just look for any substantial treetop with lots of branches that are hanging off all the way into the water.” “One of my favorite places to fish in the fall is around Moro Bay State Park,” he said. “Especially when you get into November and everybody else is hunting. That’s a really good time to fish that part of the river because it is typically at its lowest and clearest of the year, which is great for bass and crappie fishing.”

In terms of scenery, Olive said the Ouachita River bottoms are one of the few places in Southern Arkansas where you can see colorful fall foliage due to the hardwoods found there. “So in my opinion, it’s really one of the most scenic places to be in South Arkansas during the fall.” For more details on fishing in Arkansas, visit arkansas.com/outdoors/fishing/.