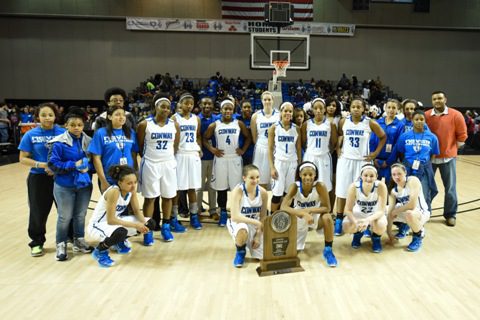 
A dream season came to an abrupt halt for the Conway Lady Cats in Hot Springs last weekend. The Lady Cats fell just short of repeating as 7A champions, falling to Fayetteville in the 7A final, 80-65.

It was a long road to the finals for Conway as the Lady Cats faced every opponent’s best every game, as well as battled their own internal expectations.


“I think there are a lot people that have no idea how hard it is to make it back to the finals for a second year,” said Ashley Nance, Lady Cats head coach. “You have to battle complacency all year long or just being content with being there once. We had our leading scorer, Alexis Tolefree, break her wrist and miss the first part of the season, and then Kianna Speight re-tweaked her knee at the beginning of conference play. We had a lot of different lineup changes, and it took a while for us to fully gel as a team.


“So for me, what I take from our season is the ability and drive for our team to play in the last possible game of the season. Sure we didn’t win nor play very well the last game, but we also spent a week in Springdale then came home for two days and were in Hot Springs. That was a challenge in itself. But we were there — not in the stands.”


The program graduates six seniors this May — Kianna Speight, Asia Willard, Micaela Norment, Jordan Danberry, Cristin Rogers and Allie Pack — and they all will be greatly missed, according to Nance. Each senior brought unique contributions to the table.


“They have been a good group of seniors and have given a lot of time and energy into our program,” Nance said. “For me as a coach I want to be able to look back and see maturity on and off the court, and I definitely have seen growth in these six young ladies. Five of them will be playing basketball in college, which means five of them will not have to worry about school loans in 10 years. They will appreciate that one day. I look forward to keeping up with them, and without question, they will all be successful people in life.”


Danberry, the two-time Arkansas Gatorade Player of the Year, will play at the University of Arkansas this fall. Speight (Davidson College), Willard (Butler Community College), Norment (Connors State College) and Pack (John Brown University) will all also play at the next level this fall.

The six seniors leave a gaping hole for the Lady Cats, but several underclassmen — Alexis Tolefree, Savannah Lowe and Hailey Estes — gained good experience this year and will look to lead the way in 2015-16.


“I really look forward to next season,” Nance said. “We won’t be as deep as were this season, but we will have a core group of players that know how to work hard and know what it takes to be competitive in 7A. Of course anything can happen between now and November, but right now we are excited.


“There are some players [off the junior varsity roster] that have a chance to play varsity basketball and give us varsity minutes next season. I think as to how big of a role they will have will depend on their ability and drive to work hard during the off-season.”


Despite how the season ended, Nance and the Lady Cats will look back fondly on the success of the 2014-15 season and the run that was made. And the future remains bright for Lady Cat basketball.


“When you take a look at our younger teams and even into our elementary and middle schools, you see various groups of young players that will be exciting to have in high school one day,” Nance said. “With Conway only having one high school and the continuous growth of our city, there will be talent coming through every few years.”