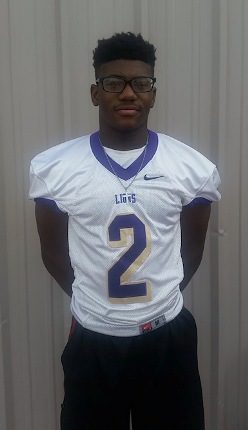 
501 fans would be hard-pressed to find a hotter team in the 2A than the England Lions. The Lions are a perfect 6-0 on the season, coming off a huge 5-2A conference win over rival Conway Christian, 27-20.


England boasts talent all across the field, but the most versatile player is likely senior Xavier Iverson.


Iverson, who can play all over the field for England, was selected to this year’s 501 Football Team — 27 players representing all 11 counties of the 501. The team boasts the best the 501 has to offer both on and off the field. Iverson was nominated by his head coach, Terry Farmer.


“Xavier has a desire to succeed,” Farmer wrote in his nomination. “He’s level-headed. He helps bring his team to another level and [displays] unselfishness. He’s willing to conform to the team’s needs. He has played quarterback, running back, wide receiver, corner back, linebacker, safety, etc.


“He’s our team captain. This season we expect him to be all-conference, all-state, our leading receiver and receive a scholarship in football.”


Last season, Iverson was the Lions’ leading receiver and led the 5-2A in receptions. “He was a lockdown corner [in 2014],” Farmer said.


As impressive as Iverson was in 2014, he’s been equally impressive and productive in his senior campaign, helping the Lions to a perfect season thus far.


“Being 6-0 feels great,” Iverson said. “Our team is doing very well and accomplishing our goals, but we still have a few things to fix to be as good as we want to be.”


England opened the season with Carlisle, and Iverson flew all over the field for the Lions. He rushed for 35 yards and one touchdown, caught one pass for 67 yards and a touchdown, returned one punt for 36 yards, recorded two tackles and made one interception.


In Week 2, Iverson was at it again against Mineral Springs, rushing for 20 yards, catching two passes for 26 yards and recording three tackles. Iverson exploded at receiver in Week 3 against Drew Central. He hauled in eight receptions for 154 yards and three touchdowns. The Lions opened 5-2A play with a win over Magnet Cove, 51-7. In that game, Iverson caught six balls for 125 yards and two touchdowns and returned one punt for 82 yards.


At Bigelow in Week 5, Iverson had six receptions for 54 yards and one touchdown. He also added three tackles. Last week against Conway Christian, Iverson contributed 49 total yards for England in what was the Lions’ only close game so far this season.


“To keep our success going, we have to definitely stay humble, keep working hard and listening to our coaches, as well as keep that mindset that we’ve had the first half of the season,” Iverson said.


As productive and versatile as Iverson has been on the field for the Lions, his contributions off the field are unmatched and just as critical to England’s success.


“He has good character,” Farmer said. “He is very polite and courteous. He helps those around him to be better students and citizens. He has helped in the community and volunteered with younger kids.


“He always strives to do what is right. Even when put in negative situations, he rises to leadership status.”