The Conway Symphony Orchestra will perform its first regular concert of the season in the Reynolds Performance Hall at the University of Central Arkansas at 4 p.m. Sunday, Nov. 3.

The concert marks the orchestra’s 35th year of performances.

Tickets can be purchased by calling 501.4503265 or at conwaysymphony.org. A subscription to the orchestra can also be purchased at the box office window. Subscribers will receive a special gift in the lobby of Reynolds.

Conducted by Music Director Israel Getzov and assistant conductor Isaac Terceros of the Santa Cruz Philharmonic in Bolivia, Echoes of Desire features music from three of the greatest masterminds of orchestral repertoire: Verdi, Mozart and Beethoven.

“This concert is the culmination of a 15-year project in which we have performed all of Beethoven’s works, and will now be performing the final of the nine symphonies, which is a major feat of a growing orchestra. We saved Symphony No. 6 for last because it is the most challenging and delicate of them all, and the audience will surely love it,” Getzov said.

Lorraine Duso Kitts, double reeds professor at UCA and international performer, will play the “Oboe Concerto in C Major” by Mozart alongside the orchestra. This impressive and fascinating solo is one of the most important concertos in the oboe repertoire.

Echoes of Desire is sponsored by Centennial Bank.

The Conway Symphony Orchestra brings professional concerts, exciting guest artists and high-quality music to the Central Arkansas community. For more information on concerts and other programs, visit ConwaySymphony.org or call 501.269.1066. 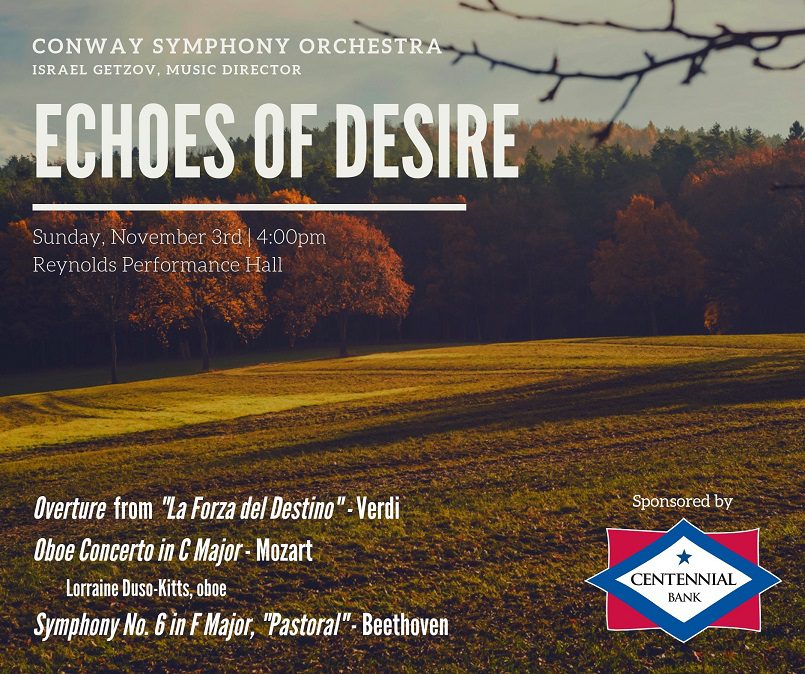