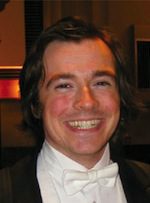 The Conway Symphony Orchestra will kick off its 27th season with a free, community concert on Sept. 23, 7:30 p.m. at Simon Park in downtown Conway. The full orchestra will take the Kris Allen stage to perform Beethoven’s Symphony No. 1 and “Winter” from Vivaldi’s Four Seasons with violin soloist Darby BeDell.

In the event of rain, the concert will be held at the Snow Fine Arts recital hall on the UCA campus. “An Evening in the Park” is part of the CSO on the Go! series of free performances, and is underwritten by Southwestern Energy Co.


The Central Arkansas community is invited to bring their friends and families, (plus chairs and blankets) and enjoy the symphony as the sun goes down. Several restaurants will be open in downtown Conway for dinner before the performance, including rooftop dining at Michelangelo’s. The Green Cart Deli will also be offering its specially created “Izzy Dog” at the park, named for conductor Israel Getzov.


Soloist Darby BeDell is in his sixth season as principal second violin with the Conway Symphony and as a member of the Arkansas Symphony’s Rockefeller Quartet. He has regularly participated in summer festivals including Aspen, Steamboat Springs, Weathersfield, Vermont, and the National Repertory Orchestra in Breckenridge.  Mr. BeDell is a member of the Suzuki Association of Central Arkansas, and teaches in the Little Rock Adventures in the Arts program.


The Conway Symphony offers a six-concert season, with all performances at the Reynolds Performance Hall on the UCA Campus, except for the outdoor community concert. The schedule for the remainder of the season is:


The Conway Symphony Orchestra, under the direction of Israel Getzov, exists to create meaningful experiences through performances and education. For more information on concerts and other musical and educational programs, visit www.ConwaySymphony.org, or contact general manager Vicki Crockett, [email protected], 501.269.1066.