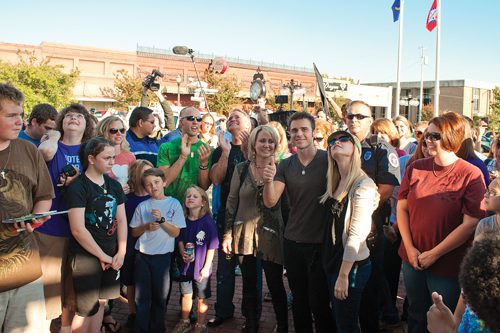 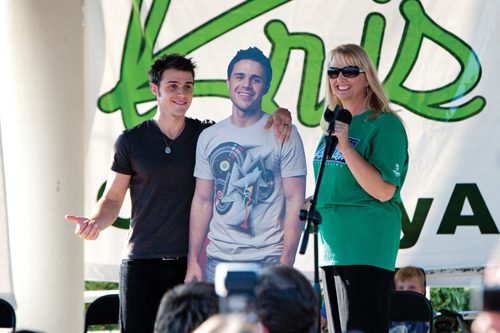 Jeff Matthews, morning host on Little Rock radio station B98.5, served as the emcee for the event, which included a performance by the University of Central Arkansas Honeybear Dance Team.

Lori Ross, chairman of the board of directors of the Conway Area Chamber of Commerce, officially welcomed Allen back to Conway. Sonja Keith, editor and publisher of 501 LIFE, also spoke at the event about the Kris Allen Task Force, which was organized to foster support for Allen as he pursued his dream on American Idol.

Jennie McNulty Strange, executive director of Blackbird Academy of Arts, also spoke about Allen, who is supporting the organization through a benefit concert. Brandon Shatswell of New Life Church, a friend to Allen, also spoke.

Conway Mayor Tab Townsell presented remarks about Allen and read an ordinance honoring the performer. City aldermen were on hand, in a special called meeting of the Conway City Council, to unanimously approve the naming of the stage for Allen.

A film crew from American Idol was on hand for the event. Kris Allen is currently on tour, opening for Lifehouse.