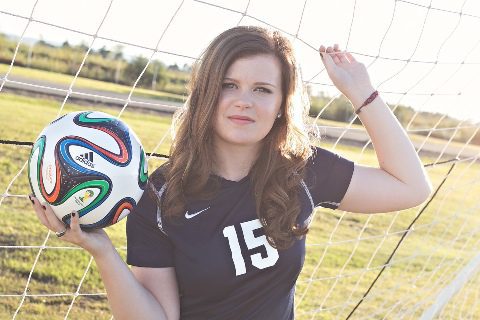 Coach Ancil Lea nominated Leanna Sartain as a 501 Player of the Week, citing her leadership, encouragement and direction on the field as her best qualities.


“Leanna tore her ACL two years ago and has undergone months of rehab to come back stronger and better,” Lea said “She is willing to play in any position I ask her.”


The injury occurred on a rain-soaked field after she made a kick to clear the ball in the first 10 minutes of a tough matchup. She was told that she could not return to play and would probably miss the rest of the season. “I was devastated I couldn’t go back and help my team,” she said. “I knew it wasn’t over. I’ve seen other teammates come back from this type of injury.


“There was no stopping me from coming back to play the sport I love.”


Sartain has played soccer for about 13 years. She has enjoyed playing recreational soccer through the Conway Soccer Club, Rush and Little Rock Football Club. In addition to soccer, she plays golf and enjoys bowling.


“I love that soccer is a team sport,” she said about what she enjoys most about the sport. “You can’t do it all by yourself.”


By a unanimous vote, Sartain was selected by her team to serve as captain. “She is dedicated to the team!” Lea said.


Sartain was touched that her teammates would name her captain. “I love my team and going to practice every day,” she said. “It was a humbling experience.”


“She is a selfless player,” Lea said. “She helps me coordinate the team activities.”


This is only Sartain’s second year to play goalie. “It’s not the easiest position on the field,” she said, explaining that some have that misconception. She said a goalkeeper has to be willing to lay their body on the line to keep the opponent from scoring. While initially out of her comfort zone, Sartain said she now loves playing the goalie position.


Off the field, Lea describes Sartain as a hard worker, great student and fun to be around. A member of the youth group at Conway’s First Baptist Church, she volunteers in service projects with Conway Christian.


A daughter of Bridgett and John Cossey and Paul Sartain, she plans to attend the University of Arkansas at Little Rock in the fall to pursue a degree in criminal justice. Although this spring will be her last competitive soccer season, she hopes to continue to play and is looking forward to intramurals.


Lea is looking to Sartain and the entire team to build on last year’s success, which included an appearance in the state tournament. “Not everyone wants to play keeper when they’re a good field player,” Lea said of Sartain’s contributions last year. “She had to step up and do what’s best for the team and play a role that is critical to our success – maybe not the positions she wanted, and never complained.”


Competing in the 4A East Conference, the Conway Christian Lady Eagles are 2-0.

“I am so very proud of Leanna,” Lea said. “She has blessed me with her attitude and dedication to come back after a serious injury/surgery. She is a champion!”