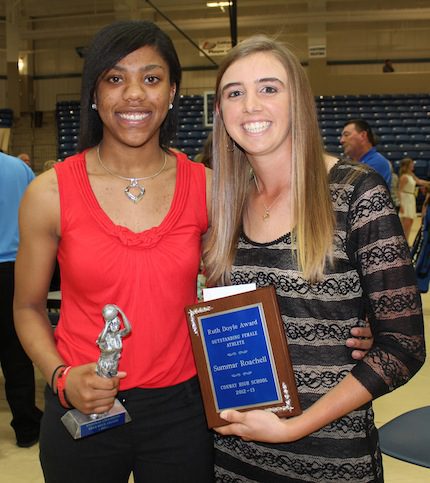 The event included a dinner for student athletes – provided by Virco Mfg. – followed by a program.


Athletic director Steve Daniels thanked Virco for its support as well as parents for their help. Booster club president Bill Roachell, who has served with his wife Lisa, also thanked school officials and club officers. “It’s hard to believe how fast the year has flown by,” Roachell said.


2012 CHS graduate Derek Walter – who attends the University of Central Arkansas – was the emcee for the event. He introduced each senior, sharing information on their sport, accomplishments and future plans.


“During the 2012-13 school year, the athletic programs have been very successful,” he said. “This is a direct result of hard work, dedication, teamwork, sweat and long hours.”

“In addition, our spring sports are still competing and those state tournaments will begin next week.”


Top scholar athletes awards were presented to Sigan Chen and  Karthik Garimella. Chen, a member of the track and cross country teams, has a grade point average of 4.43. Garimella, a member of the tennis team, has a GPA of 4.16. Each received a $500 award from Conway Corp. to continue their education.


Outstanding athlete awards were presented to Summar Roachell and Brannon Kotch. Each was presented with a $250 check from Conway Corp. to continue their education.


“Every year an award is presented to the top male and female athlete as voted on by the coaches,” Walter said. “These athletes demonstrate a winning attitude, hard work and dedication to their sport and teammates.”


Roachell has been a member of the golf team for four years, winning all conference and all state honors every year. She won four girls’ golf state championships and was the overall golf state champion for three years. She plans to play golf at the University of Arkansas at Fayetteville in the fall.


Kotch has lettered three years on the Wampus Cat football team. He was an all conference and all state selection. In addition, he is a three-year letterman in track and a two-year letterman in wrestling. Kotch has signed a letter of intent to play football this fall at Ouachita Baptist University.

A video collage was presented featuring photos of senior athletes.