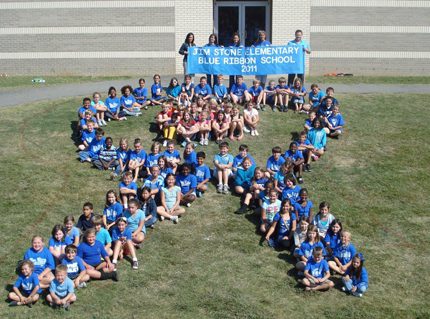 Being named one of 315 schools designated a National Blue Ribbon School for 2011 has changed the culture of Jim Stone Elementary.

There’s been what principal Mark Lewis calls “a certain swagger” among students, parents and staff, reflecting the pride in being chosen as one of America’s most successful schools.

There’s been added pressure, and sure enough, test scores are up yet again.

There’s been motivation. Teachers have been known to tell the occasional erring student, “We are a National Blue Ribbon School. We don’t act like that here.”

And there’s been what Lewis calls “a huge focus” on the academic aspect of public education.

And all of that is good.

The Conway school was one of four from Arkansas (joining Bellview Elementary in Rogers, Forest Heights Elementary in Harrison and Richland Elementary in West Memphis) cited by the U.S. Department of Education for their overall academic excellence or for their success in closing achievement gaps.

Lewis, who earned a bachelor’s and master’s degree from the University of Central Arkansas, is pursuing his doctorate through the University of Arkansas. He taught at Ida Burns Elementary for three years before becoming assistant principal at both Jim Stone and Theodore Jones and, in 2004, principal at Jim Stone. His mother, Carolyn, is a retired Conway teacher and former school board member for whom the newest elementary school in the district is named.

Lewis, gifted and talented coordinator Starla Gresham and assistant principal Dayna Coleman flew to Washington, D.C., in November on behalf of the school for an awards ceremony where they accepted a plaque and flag signifying the National Blue Ribbon status.

Of the total honored, 266 were public schools and 49 were private.

According to www2.ed.gov/programs/nclbbrs/, the National Blue Ribbon Schools program recognizes elementary, middle and high schools where students achieve at very high levels and/or where the achievement gap is narrowing. The program identifies best practices in school leadership and teaching and publicizes those practices.

“The important part is we didn’t seek it,” Lewis said, remembering that Kimbrell contacted Conway Superintendent Dr. Greg Murry to inform him of the nomination. Murry then made a visit to the school.

“He came in and said, ‘Let’s go for a walk,’ which means your guilty conscience starts kicking in,” Lewis said. “But he had a certain smile.”

Murry said the designation of Blue Ribbon status was the result of years of dedicated service to children by the staff at Jim Stone.

“It represents what is the very best of all of our schools — the commitment to excellence and, more importantly, our commitment to our kids,” he said.

Lewis said the whole staff pitched in to complete the application, with Gresham and Coleman serving as “a steering committee.”

“I served as executive producer or editor,” he said. “I’d like to say I did my share, but they took it and ran with it. Where a lot of principals and leaders make mistakes is, if you’re the smartest person in the class, then you’re in the wrong class. You’ve got to be humble enough to go out and hire people who are smarter than you and turn them loose to do their job.”

The exacting application process was a little off-putting, he said.

“You have to start peeling that onion and see how bad it smells,” he explained. “The experience is either going to be enlightening or disturbing. We were fortunate that it was enlightening for us.”

As an example, he said that when he became principal in 2004, the school had 4 percent of its student body eligible for free and reduced lunches. By the time of the application process, the number had risen to 32.5 percent. Yet test scores have continued to rise.

“Even though there’s a stigma that for people who are living in poverty, success is that much more difficult for them, we learned that kids are going to rise to the expectations,” he said.

In fact, the 2012 test scores show fourth-grade literacy at 99 percent, an increase from the application year.

“We’ve seen continued improvement,” said Lewis, the third principal in the history of JSES, following Cecil Boothe and Susan Young, who he said “literally handed me the keys and said, ‘Don’t mess this up.’ When you get to where you’re that high, it’s extremely difficult to show movement. You get down to literally one or two kids that literally had a bad day.”

Thus the extra pressure in the wake of the Blue Ribbon designation.

“It was never, ever hard to get my team up for a game, but it was hard to try to handle the mounting pressure,” he said. “Once you’ve attained that success, the fear of losing can either be detrimental or it can be a motivator. Luckily, my folks stepped up to the plate, and our test scores went up. That’s how they reacted to the pressure of it, and I’m just blown away, though I had the high expectations.”

He said although the Conway district, particularly compared to others, celebrates the successes of all students, be they academic, athletic or in the arts, the Blue Ribbon designation is a sign of a cultural shift.

“It’s important to me that every child gets that (recognition) in some shape, form or fashion,” he said.

To celebrate their accomplishment, Jim Stone students dressed in blue and formed a blue ribbon for the cover of their yearbook.

The designation is a game-changer, Lewis said.

“My son Adam started kindergarten this year, so he’s never known a school that wasn’t a National Blue Ribbon School,” he said. “The fourth-graders have a different perspective, but they still had that pride.